When in Rome... Write

I've never been to Rome. I'd love to go there some day. But today's guest on my blog has enjoyed a visit and written a book. So I'm delighted to welcome award-winning screenwriter, actor, director and produce Paul Cross to my blog . With many feature films and TV movies to his credit,including OPERATION TERROR, SEVERE VISIBILITY, STUDS LONIGAN and AMAZONS, he's also the writer/director/producer of the award-winning documentaries, FOLLOW THE LEADER and WEST END STORY, and now the author of the new novel, A COUNTERFEIT PRIEST, which forms the basis for his screenplay by the same title.

So... who would write about a counterfeit priest, and why, and where would the story come from? Over to you Paul, and thank you for visiting my blog. 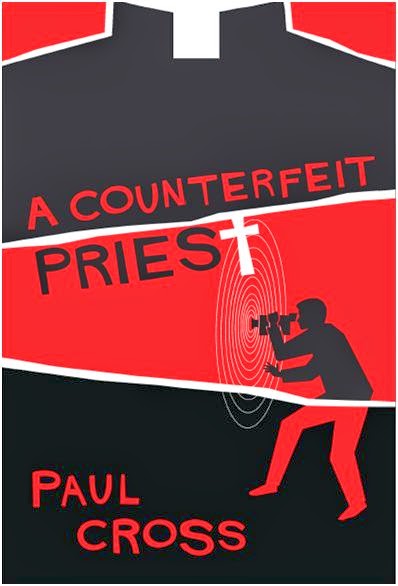 Notes on A Counterfeit Priest
When in Rome,...write!

Someone sent me an email recently after reading my novel, A Counterfeit Priest asking me if I was a defrocked priest! I probably have been suspected of being many things in my life but a defrocked priest is most definitely not one of them.  As I went on to read the email completely I found that it was in actuality a complement as they seemed to enjoy the detail that went into writing the novel. I have heard this many times in regard to my book and frankly when I was writing it I didn't even know that I was being so detailed. I think the reason for that is that when I write a screenplay or in this case a novel, I just sit at my computer and see the entire scene played out in my head leaving me the task of simply having to write it down. The hard part is  perfecting those images later on that flashed so fleetingly  in my head days ago sometimes even weeks ago when I was hurriedly writing them down, not for a moment cognizant of the fact that many times these images seem somewhat blurry when attempting to perfect them.  Even though I don't follow the occult I sometimes think that maybe I'm channeling without even knowing it. Is it possible that all writing rather it be for the screen, stage or page is doing just that, channeling? I doubt if that's really true but perhaps it's possible. I mean where do all these ideas really come from? A lot come from personal experiences but like I said earlier, I have never been a priest. Although it's possible that because I'm an actor by trade for the most part that I have simply become more adept at improvisation than I realized.

So when someone asks me how I got the idea for A Counterfeit Priest, I have to honestly say that it just came to me when I was living in Rome and was completely fascinated by the Vatican and couldn't help but fantasize about what really went on behind those foreboding walls that surround the most watched and scrutinized principality in the world.

As I stood there wondering what it must be like to be a part of that world guarded by Swiss sentinels, I decided to buy a cassock and white collar and attempt to penetrate the Vatican via the Porta Santa Anna and see for myself. However I was soon found out when the color of my socks, they were white, how could I have been that stupid!?,  gave me away. I was politely escorted to a small room in one of the secluded sections of the ancient fortress and after a brief Q & A period, I was the A and a member of the Vatican gendarme was the Q, I was walked back to the Porta Santa Anna not really knowing if the man bought my tale about being a priest without any identification who was looking for the papal audience hall. I was soon bid farewell at the gate albeit without my camera which I never did get back.

The entire experience might have seemed futile at that time costing me a hundred lira, they didn't have euros then, and the price of the camera,  but later on when I was writing the screenplay and subsequently the novel, my little charade served me well  as the escapade found its way into both versions of my story.

So if there’s a lesson to be learned here by any writer reading this it’s don’t wear white socks with a black cassock when trying to sneak into the Vatican! Remember, when in Rome do as the Romans. And when in the Vatican, do as the clergy as the only person who wears white socks is the pope!

I did not know that! And now I'm imagining the scene from the point of view of an onlooker wondering watching your exit at the gate.

In the novel, of course, the counterfeit priest gets a lot further...

Find out more at:  http://acounterfeitpriest.com/

Blaming the Catholic Church for the death of his wife, filmmaker Henry Hawkins is determined to make an exposé revealing the Church’s responsibility. Not divulging the true intentions of his documentary, Henry’s quest leads him to Rome where he’s promised access to the Vatican by its highest ranking cardinal, Silvio Contini, the Secretary of State of Vatican City.

After arriving in the Eternal City, Cardinal Contini reneges on his agreement to meet with Henry. Refusing to have his plan compromised, Henry devises a bold scheme to get behind the impregnable walls of the Vatican to confront Contini. However, when the pope suddenly dies a quirk of fate throws Henry into a whirlwind when he is isolated in the inner sanctum of the papal conclave where he covertly records the secret election process and clandestinely films Contini's unscrupulous method of eliminating papal candidates for his own agenda. Henry’s obsession to avenge the loss of his wife is put in jeopardy when his tapes are stolen and he discovers that if Contini is elected pope he will alter sacred Church doctrine, thereby destroying the meaning of his wife’s death and all that she believed in.

To prevent this, Henry must reclaim his tapes while ultimately deciding whether to smuggle them out of the conclave and use the information they reveal to make his documentary, or exploit them to the voting cardinals to stop Contini’s election thereby upholding the dignity of his wife’s beliefs.

PAUL CROSS is an award-winning screenwriter, actor, director and producer with many feature films including OPERATION TERROR, and SEVERE VISIBILITY, and television movies such as STUDS LONIGAN and AMAZONS to his credits. He is also the writer/director/producer of the award-winning documentaries, FOLLOW the LEADER and WEST END STORY. His novel A COUNTERFEIT PRIEST is the basis for his screenplay by the same title. Paul lives in Hollywood, California.
http://www.imdb.com/name/nm0189237/
guest post

CA Heaven said…
I've been to Rome a coupe of time.. Very fascinating city, with one of my favorite museums: The Vatican Museum >:)

Sheila Deeth said…
My parents visited there but I never did. Perhaps it should be on my bucket list.
April 4, 2014 at 2:06 PM