Showing posts from February, 2020
Show all

The contract killer changed his life!

Today I'm participating in Andrew Segal’s THE LYME REGIS MURDERS Virtual Book Tour, hosted by PUYB! When you read the "about the author" section below, you'll know why I had to read the book! But first, my review... The Lyme Regis Murders by Andrew Segal Lyme Regis is a quiet British seaside town, with beach and cliffs and cops and residents… it could be television’s Broadchurch perhaps, and Andrew Segal’s novel, The Lyme Regis Murders, will probably remind readers of the TV series. Dead bodies, suffering children, multiple suspects, and everyone hiding skeletons in their cupboards; it’s the sort of heady mix that leads to an appropriately long and tortuous investigation. A “multi-lingual English, Spanish and French-speaking Politics Philosophy and Economics, Oxford graduate with ... more than just a smattering of Hebrew” is hired to investigate the murder of three children, but she has other cases to work on, and an unraveling plait of relationships to d
Post a Comment
Read more

Title, subtitle, cover? What attracts you?

February 19, 2020
What attracts you to a non-fiction book? I was attracted to one of the books in this collection by the fact that the author was a scientist, and by the implication that he enjoyed a more European understanding of the word "liberal." Did it make me love the book--no so much. So, was I attracted by the wrong thing. What makes you less keen on reading a non-fiction book? The same book has a very American cover with stark red sky behind the Capitol, and lightning flash. Knowing it was non-fiction, that made me feel it might be heavily political, and I was right. Interesting... So, cover or blurb? What attracts you and what puts you off? The Liberal Record by Marcelo Brazzi attracted me with its blurb but not its cover. As I read, the author's assumptions about his readers began to annoy me. But he's writing for a particular audience, and perhaps I'm just not a member of that audience. Read me review and see what you think, and then read the book with some bold
Post a Comment
Read more

February 18, 2020
Is Scandi-noir a "thing." Are Scandinavian thrillers always darker than others. And American ones more sarcastic. And... Or is a book just a book, defining its own genre and resting in the shelter of someone else's label on the shelf? Two of the thrillers I recently read were Scandinavian, and they were definitely dark. Three American thrillers definitely had that gently sarcastic voice. And all four were blended with social commentary. Intriguing... Anyway, here are some reviews. Pick your coffee blend and your book: Bullet River by Dan Ames is a short, sharp novella of a bounty hunter housesitting and dead body hunting. Fast, violent, and exciting, enjoy this one with a lively easy-drinking two-star coffee. If I had two lives by A.B. Whelan is a much slower read, with violent crime to be solved, and the mystery of who we might have been if we hadn't grown up with the opportunities that drive us. It's a complex tale, twisting and dark, best enjoyed with a d
Post a Comment
Read more

Ties that bind and cuts that tear--views of a world not totally forsaken after all!

I'm delighted to be one of the hosts for the "We of the Forsaken" book tour today, and delighted also to be a reader of the book. Reminiscent of Ursula LeGuin’s Malafrena, We of the Forsaken World both creates and recreates our world in the realm of people other than ourselves. From primitive tribe to modern betrayal, from human need to foresight and mysticism, from the voices of believable people to the gathered voice of life, the stories pull the reader in. Uncannily disconcerting with their separate worlds, intriguingly connected with poems that blend one character into the next, universal in their overwhelming humanity, and absorbing with their very human trials and tribulations, the stories each make the reader stop and think differently, see through different eyes, and accept the unity that binds us. A forsaken world perhaps, but there’s a harmony to these stories and characters that reveals one world, seen with “the eyes of the eternal.” We of the Forsaken
Post a Comment
Read more

Do novels fly through time and space?

February 16, 2020
From historical England to distant planets, via Chicago, Shanghai and more, I've been enjoying a wealth of deeply absorbing novels recently--I just haven't had time to post my book reviews. But now my mum's back in England and my husband's playing chess, so here are some reviews of books that carried me through time and space over Christmas. The Familiars by Stacey Halls takes readers to England in the 1600s, the time of the Pendle Witch trials. Neighbors accuse neighbors, friends betray, spouses keep secrets, and a young pregnant girl grow into wisdom and strength during the course of the tale. Well-researched, darkly real, and well-told, it's one to enjoy with some dark five-star coffee. Once Upon a River by Diane Setterfield is set around the River Thames in the late 1800s. There are still rumors of magic in the world, especially when a dead child dragged from a river comes back to life. But there's also science, human darkness, and kindess and hope. En
Post a Comment
Read more

Do short stories cut straight to your emotions?

February 15, 2020
I read somewhere that poems are meant to cut straight to the emotions. One of the books I read recently was a poetry book where the photographs reached out to the emotions too. Another was an intriguing depiction of four worlds through the eyes of fascinating characters, with intersecting emotions and separate lives--it reminded me of Ursula LeGuin's Malafrena. And then there were the anthologies. And then... Meanwhile I'm writing chapters, one by one, of my Hemlock series, delighting in the reaction of friends who seem eager to read the next bit... but they're friends; the real test will be when I try to get it published. Anyway, here are a few more book reviews as I struggle to catch up on catching up: Beneath all this Beauty by Danny Newman, photos by Nili Shchory , is the illustrated poetry book I mentioned--short, but beautifully put together, with fascinating photographs and smoothly biting words. Enjoy with a strong, dark, five-star coffee. Next is  neXt by L
Post a Comment
Read more

Do you trust the process? 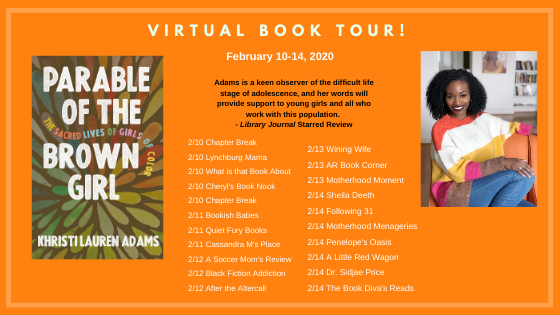 Today I'm delighted to welcome Khristi Adams to my blog. You can find her at  https://khristilaurenadams. com/  and she's the author of the Parable of the Brown Girl, which you can find: on  Amazon at https://www.amazon.com/ Parable-Brown-Girl-Sacred- Lives/dp/1506455689/ref=tmm_ pap_swatch_0?_encoding=UTF8& qid=1578599274&sr=8-1 or B&N: https://www.barnesandnoble. com/w/parable-of-the-brown- girl-khristi-lauren-adams/ 1132529558?ean=9781506455686 The book took time to write, and time again to get into the hand of readers. But it comes out this month, so I'd love to know how the author feels about the wait... the process perhaps... and here she is to tell us. What writing your book taught you: TRUST THE PROCESS Writing this book has taught me about trusting the process. I’ve heard the phrase “trust the process” a great deal in the past year. I first heard it at a Philadelphia 76ers game when one of the players stepped to the free-throw line and t
Post a Comment
Read more

February 13, 2020
Will someone buy you a book for Valentine's Day? What sort of book? For my husband it might have to be a thriller, Scandi-noir perhaps. For my mum, a cat book for sure. For my sons, maybe a scifi action adventure. For their girlfriends? And for me? If your taste tends toward mystery and/or food and/or animals and/or romance, there's sure to be something here to fit the bill. Gluten-Free Murder by P.D. Workman is the first of a series of small-town mysteries, tinged with romance, and deliciously scented with baking. It's even gluten-free baking, which is bound to appeal to me. Light-hearted, fun, and even moderately informative, it's a good cozy read to enjoy with some easy-drinking two-star coffee. Plus there's a cat! Then there's Cat Café by Mollie Hunt . It's either the 5th or 6th in its series, and I'm gradually catching up after reading the first one some while ago. Set around a cat cafe in Portland, rather like my beloved Purringtons, it'
Post a Comment
Read more
More posts