Showing posts from February, 2017
Show all

Searching for Inspiration and Character... and Magic?

Today I'm delighted to welcome authors Christopher Hansen and J.R. Fehr to my blog with a joint guest posts, celebrating their Magician's Workshop series. Volumes 1 and 2 are already available (see details below), but what turns a novel into a series, and will there be more?  What's New At The Magician's Workshop by Christopher Hansen and J. R. Fehr The Magician's Workshop is going to be an epic tale that we expect will span several volumes. Volume One introduces the reader to the characters and the world and explores the pressures that exist for kids in a world where everyone can do magic. Volume Two deals with the kids entering the coming of age ceremony that everyone has to participate in. Our inspiration for characters is everywhere. Every encounter—no matter how brief—is a story waiting to unfold. We’ve also spent a lot of time studying theories of personality. This knowledge has helped us craft the voices of our characters and imagine how they mig
Post a Comment
Read more

Have you ever called someone Messy?

Today I have a very cool young guest on my blog. Her name is Misry and she's here from Paromita Goswami's middle-schoo, teen and YA book, Grow Up Messy, published by Ficus India. So, find yourself a comfy chair and a cup of tea or coffee. Let's talk with Misry. Misry, can you tell us something about your family and the place where you live? I have a big family at my Dadu’s house. Let me talk about them. I visited there during Pallavi Mashi’s marriage. It’s a huge house with lots of people and many different kind of animals.  Dadu, Dida, Nilesh Mama his wife Soma Mami their identical twins Dia and Ria along with Pallavi Mashi live there. And also the white Pomeranian dogs Bura and Buri. You will just love the place. Back home, its only me, Ma and Daddy. And I don’t like it. I have nobody to play with at home. That sounds sad. Do you have any friends there? My best friends are Bheeru and Honey. But cross your heart that you won’t share this little sec
2 comments
Read more

What do Survivors do?

February 13, 2017
One of my sons views the future with dread, imagines the worst, and believes we might all soon be dead. It's a sad point of view, but I recognize it from my own youth, when I was always sure one of the "big three" (Russia, America or China) would foolishly "push the button" and condemn us all to die. Eventually movie-makers filmed their tales - Australians patiently awaiting the end; triumphant American pioneers rebuilding it all, or downtrodden English survivors slaving on. Meanwhile I grew up and we're still here. Meanwhile I grew up and some of those parents we relied on might not be here long, and I find myself pondering different kinds of survival--reading about them too, from Atul Gawande's exploration of late-life care to Carl Alves' alien destruction--so here are some reviews. Atul Gawande's Being Mortal offers an incisive glimpse into that later part of life, where we age, get sick, and maybe even die. The simple idea that in the go
Post a Comment
Read more

Do you have a favorite publisher?

February 12, 2017
Disaster struck and our basement flooded - the family room where we watch TV, where I work on my computer, where I live most of my life... all under several inches of water. Now the TV's in the living room, the computer's in the kitchen, the bookshelves (those that survived) are stacked on a tarpaulin, and the books (those that survived) are hidden in boxes in the garage. My husband has great plans for remodeling at this point, since water has already begun the job. He's not sure, however, how books will fit into the scheme. Perhaps we have too many (still?). Perhaps I should get rid of some... get rid of some bookshelves too... perhaps. But packing the books into boxes was like revisiting old friends - so glad I didn't lose this one; so delighted to share memories of reading another. The thought of throwing out those that were spared has me quietly despairing, and pondering of course, which ones shall remain. Which leads to my question: Do I have a favorite author
Post a Comment
Read more 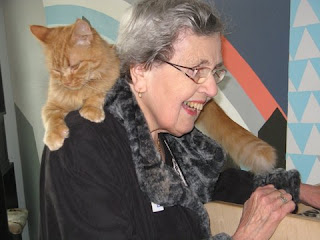 My Mum loves cats. They seem to quite like her too, and we had a lovely time visiting them at a cat cafe recently. But now Mum's back in England. My home is dogless, mumless and catless. And I'm reading books. I love books. Sadly, though, they're not so soft and cuddly as cats and they usually don't wrap themselves around my neck. They were great to share with Mum though, before she left. Having watched all those cats, a book entitled A Cat Is Watching by Roger A. Caras seems like a good place to start. It's an well-balanced mix of psychology, anecdote and opinion, and I really enjoyed it. Share it with your favorite feline and a cup of well-balanced three-star coffee. Some of the cats at the cafe were more playful than watching. I had great fun with one who loved to bounce after feathered toys. No bird will be safe when this cat finds a home. But surely the cat knows the toy isn't real. Is it playing or training? Do Cats Think by Paul Corey might help
2 comments
Read more

Today I'm delighted to welcome Ukrainian author Olga Petrenko to my blog. Her book has the enticing title, Intimacy on the Plate, which inspires me to wonder What is an intimate plate? And what inspired her to write this book? If you want to the know the answers to these questions and more, please read on.  Olga Petrenko grew up in Ukraine, where she learned to appreciate traditional Eastern European hospitality and homemaking. As an adult, she studied the chemistry of foods for their unique effects on the human body and mind. She poured the next 10 years of her life into creating the recipes contained in the aphrodisiac cookbook, Intimacy On The Plate: 200+ Aphrodisiac Recipes to Spice Up Your Love Life at Home Tonight . Can you resist? Thank you so much for visiting my blog today, Olga. And I guess my first question is...  Aphrodisiac recipes? What does aphrodisiac really mean? The word “aphrodisiac” comes from the name of the Greek goddess of beauty a
Post a Comment
Read more
More posts