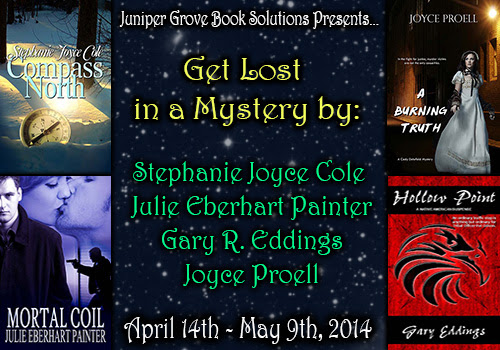 Today I'm delighted to welcome author Gary Eddings to my blog. He's the authorof Hollow Point, a  mystery suspense for age 13 and up, where everyone on and off the Reservation might be suspect, and a dangerous drug is could claim more innocent victims while a killer goes free. Gary Eddings is one of four mystery authors touring the net with Juniper Grove this week, so don't forget to read the rest of this post and learn about more books, as well as entering a wonderful giveaway!

Having long been hooked on Tony Hillerman's mysteries, and more recently on Montana and Dakota by Gwen Florio, I knew exactly what I wanted to ask Mr. Eddings:


How do tribal issues influence the way you write?

And here's his answer. Thank you so much Gary! 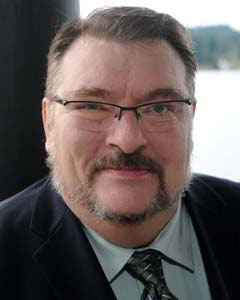 Having had some Native American friends during my life, it occurred to  me that the whole issue of Native American culture in our country was lacking. The indigenous folks of course already knew this for years.  I want to write about contemporary Native cultural action with others. There are plenty of historical works out there, so this seemed to be a natural fit.

Being the astute high school know-it-all who had a Nez Perce friend whose Great Grandfather just happened to be Chief Lawyer of Chief Joseph’s band, I began to ask some questions that were not well thought out. As a matter of fact, this guy’s friendship with me began as a fist fight at a home football game and it grew from there. Visions of this circulated in my head when I saw him become miffed at the interrogation. I received some answers, although some where a little hard to hear through his gritted teeth.

That is when I started to learn a bit about cultural sensitivity. Over the years I have acquired several Native friends and acquaintances from all walks of life and have since figured out through a great deal of trial and error that there is no one thing that can define an individual Native’s traits any more than a Non-Native’s. Respect seems to be a common thread for most people I have met, though.

I think that part of my challenge as a fiction writer is to maintain as much of that respect as possible in the stories, yet not avoid some of the attributions that cause problems sometimes greater than the world around them.  For instance, in Hollow Point I highlight the problem of drug usage by the teens without disparaging the work the Tribe does in caring for the addicted. Sometimes it is a fine line, even though it is fiction.

Thank you for allowing me to be your guest!


Thank you Gary. And your post certainly makes me want to read your book.

There is no such thing as an ordinary traffic stop, something Tribal Officer Pat Colson is reminded of when pulling over a dusty old Buick. Before he knows it, shots are flying and he is huddled behind his police cruiser for cover.
In the ensuring investigation, a sizable amount of methamphetamine is discovered in the suspects’ vehicle. Uncut and very potent, the question is where does it come from— the Reservation or elsewhere?
With everyone on the Reservation becoming a suspect, and little information to go on, Colson must act fast to stop the dangerous drug from killing more innocent victims and stop a murderer in his tracks.
Amazon | GoodReads

About the Author:
I retired as a fire department EMS Division Chief for Central Kitsap Fire and Rescue in 2005. I have been writing seriously since mid-2009, and this is my second novel with Champagne Book Group. I am also a member of the Pacific Northwest Writers Association. I am the father of four and the grandfather of three; a two year old grandson and newly-minted twin girls.
Amazon Author Page | Facebook | Twitter | GoodReads | Website


And now for some information about the other three books...

Meredith slips into a new identity and a new life in a small town in Alaska, she discovers it’s not that easy to leave behind the baggage from her past.
Set in the spectacular natural landscape of Southcentral Alaska,
COMPASS NORTH tracks an unexpected journey of personal reinvention.
Reeling from the sudden breakup of her disastrous marriage, Meredith barely escapes a freak accident in Alaska and is presumed dead. She stumbles into a new identity and a new life in a quirky small town. As new friendships grow, Meredith has to learn to trust in herself again.
When a romance with a local fisherman unexpectedly blossoms, Meredith’s secret jeopardizes her hopes for future happiness. And someone is searching for her, someone who will threaten Meredith’s dream of a reinvented life.
Amazon | Barnes & Noble | GoodReads

About the Author:
Stephanie Joyce Cole lived for many decades in Alaska before she recently relocated to Seattle, WA, where she lives with her husband and a predatory but lovable Manx cat. She has an MFA in Creative Writing, Fiction from the University of Alaska, Anchorage. Her goal is to write books that are both thought-provoking and entertaining, and that will carry readers into an adventure in small-town Alaska.
Amazon Author Page | Facebook | GoodReads | Website

About Moral Coil:
When two residents in Ellen Lange’s nursing home die, Special Investigator Bill Watts is called to the scene. With the murders linked to others, known as the Ponytail Crimes, it’s only a matter of time before the killer strikes again.
Bill is a Southerner; Ellen was raised in the Midwest. Despite her efforts to remain aloof, Ellen finds herself falling in love with more than the South…
Amazon | Barnes & Noble | GoodReads

About the Author:
Julie Eberhart Painter raised in Bucks Count, Pennsylvania, boyhood home of James A Michener, is the author of Mortal Coil, Tangled Web, and the 2011 Book of the Year, Kill Fee, and sequel, Medium Rare from www.champagnebooks.com. Daughters of the Sea, e-book and print. Julie’s first paranormal romance, and Morning After Midnight are available from MuseItUp Publishing.
Amazon Author Page | Facebook | Twitter | GoodReads | Website

About a Burning Truth:

In 1881, the air in Chicago is rife with worker discontent, yet business titan Doyle Flanagan is hopeful for the future. He looks forward to a lifetime of peaceful bliss with Cady Delafield and leaving the wretched past behind. But his life is once again thrown into disarray when his office is vandalized and the night watchman viciously murdered. Clues lead to a powerful organized labor movement. Targeted in the press as anti-labor and with a big rally staged next door to his offices, Doyle must uncover the culprits before his wedding plans and his livelihood go up in smoke.
Plagued by memories of four brutal deaths, school director Cady Delafield is determined to drive the recent tragedies from her mind and enjoy being courted. Although his commanding personality threatens to overshadow her, Doyle Flanagan is the most dynamic man she’s ever met. When another tragedy unfolds placing him at the center, she takes action—action that could shatter her future dreams.
Amazon | Barnes & Noble | GoodReads 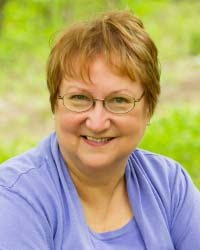 About the Author:
Joyce grew up in Minnesota and attended college and grad school in Chicago. After working in mental health as a clinical social worker, she retired to write full-time. Her first book, Eliza, was published in 2012. A Burning Truth is the second in the Cady Delafield series. When she isn’t writing historical suspense or romance, she loves to travel, winter in Florida, swim, read and walks almost every day. She loves chocolate almost as much as crossword puzzles. She and her husband make their home in rural Minnesota in her very own little house on the prairie.
Amazon Author Page | Facebook | Twitter | GoodReads | Website

Giveaway Details:
There is a tour wide giveaway. Prizes include the following:
Giveaway is International.

Find out more. Follow the other tour posts at...

Link to the event page:  http://junipergrovebooksolutions.com/multiple-author-mystery-tour/ a
guest post

Sheila Deeth said…
Thank you so much for visiting my blog. I really enjoyed hosting you. And I love how you describe the "astute high school know-it-all." I know I shall enjoy reading your novels when I get to them.
April 28, 2014 at 11:01 AM