Showing posts from August, 2019
Show all

How to see the past through fresh eyes

August 23, 2019
Visiting places remembered from childhood is a great way to see how quickly the world changes. Our recent trip to England brought back lots of memories, but nothing is ever quite the same. Weren't beaches wider back then? And sidewalks? And buildings... weren't they taller? Didn't people smile more, and possibly argue less? Watching old videos makes the differences even clearer - the toys the kids played with, the way they played and dressed and spoke... And then there are books. I've recently enjoyed reading several books set in the past (or even set in England in the past!) so here are some reviews. Find some coffee and see what you'd choose to read too. Dreams that never were by Greg Messel is set in the US in the sixties, telling a first-person story set around the assassination of Robert Kennedy. I remember rushing to a TV set in dismay when I heard the news - and I was a kid in England - and I remember the quotes from the late senator that preface the c
Post a Comment
Read more

Visiting family in the past, and reading kids' books

August 21, 2019
I visited family in England recently and brought back an English VCR. Our old "multi-region" VCR died in our flood and isn't made any more. Second hand versions are "available," but with reviews that say the machine overheats and only runs for about a year, so buying that way did not seem good. So... an English VCR, that reads English tapes (PAL as opposed to NTSC), but would they play on an American TV? First, of course, I had to connect the player to the TV. No SCART plug of course. I could do the red-white-yellow thing, except I'd need to find an old TV to accept them. Or... wonder of wonders... an HDMI cable? A US-UK voltage transformer (bought when we first moved here) powers the UK VCR, which connects via HDMI to the US TV, and everything works - even menus, recording to DVD, the lot! Except for the line across the bottom that says it's failed to connect to BBC1, which is not surprising. Hurray! So now, not only have I visited family, but I can
Post a Comment
Read more

What is Magical Realism? 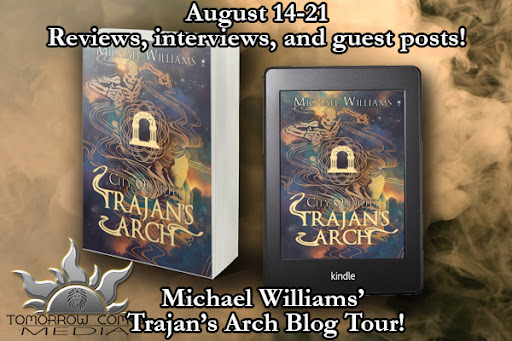 Today I'm joining in with an immersive and enthralling experience in magical realism and mythic fiction in celebration of the release of Trajan's Arch, by Michael Williams! And the author is here, on my blog, to let us know his take on magical realism. So grab a coffee, tea, beer... whatever suits... and over to you Michael. Magical Realism The term “magical realism” is a kind of fuzzy set, so it’s no accident that a good definition has always been the subject of dispute.  A lot of people I know in the speculative fiction communities are upset by the term, and for understandable reasons: they believe it’s a kind of leftover snobbery, a way for established mainstream writers to work in the fantastic mode without being associated with speculative fiction.  But literary condescension aside, I do see magical realism as something a little different from fantasy or horror—different, in fact, from more critically established modes such as expressionism or sur
2 comments
Read more

WOLVES AT OUR DOOR by Soren Paul Petrek * Historical * Action * Adventure * Title : WOLVES AT OUR DOOR Author : Soren Paul Petrek Publisher : Editions Encre Rouge/Hachette Livre Pages : 319 Genre : Historical/Action/Adventure The Allies and the Nazis are in a deadly race to develop the ultimate weapon while supersonic V-2 rockets rain down on London. Madeleine Toche and Berthold Hartmann, the German super assassin who taught her to kill, search for the secret factory where Werner von Braun and his Gestapos masters use slave labor to build the weapons as the bodies of the innocent pile up. The Allied ground forces push towards Berlin while the German SS fight savagely for each inch of ground. Finding the factory hidden beneath Mount Kohnstein, Hartmann contacts his old enemy, Winston Churchill and summons Madeleine to his side. While she moves to bring the mountain down on her enemies, Hartmann leads a daring escape from the dreaded Do
Post a Comment
Read more

I love to read and I love to review what I've read, so I was delighted to be given the chance to read and review Patrick Stull's new book, Encounters. It's not my usual kind of "picture book" though - this book of intriguing black and white images is aimed at adults, not children, and offers readers/viewers the chance to see the human body through a deeply sympathetic and empathetic observer's eye. So thank you Richard Stull, and thank you Dorothy Thompsom at Pump Up Your Book for giving me this opportunity. ENCOUNTERS by Patrick Stull Review Encounters is a large and beautiful book of captivating images, supplemented by words – a sort of picture book for adults perhaps. The images are presented in an intriguing order, blending art, photography, and image manipulation to create a poetry of form, rather than of words. And while it’s not necessarily true that every picture tells a story, the women (and men) behind this images are pleas
Post a Comment
Read more

Page or Stage? Sorcery or Sword? 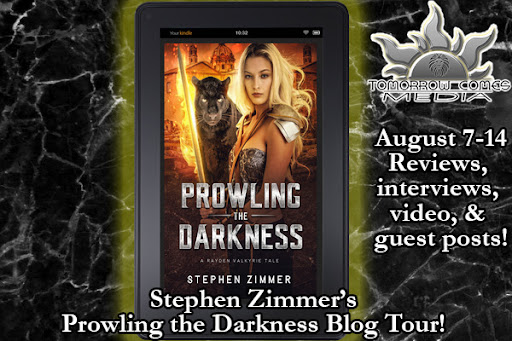 Today I'm delighted to welcome author Stephen Zimmer back to my blog as he tours the internet with another Rayden Valkyrie novella. But Rayden's not "just" the star of a cool (and growing) series of books. She's also star of her own TV pilot - maybe even a series - and Stephen's here to tell us about the difference between writing for page and screen. So, over to you Stephen, and thank you for visiting my blog: Writing for Page and Screen in Sword and Sorcery Sheila asked me to comment on the things that are both harder and easier when it comes to writing for the screen as opposed to writing for readers on the page, especially in regard to the sword and sorcery genre that my Rayden Valkyrie stories are classified in. Writing for screen and writing for the page are two entirely different kinds of writing and must be approached on their own terms. In a nutshell, writing for the screen is a minimalist art.  Only the most critical detai
1 comment
Read more
More posts