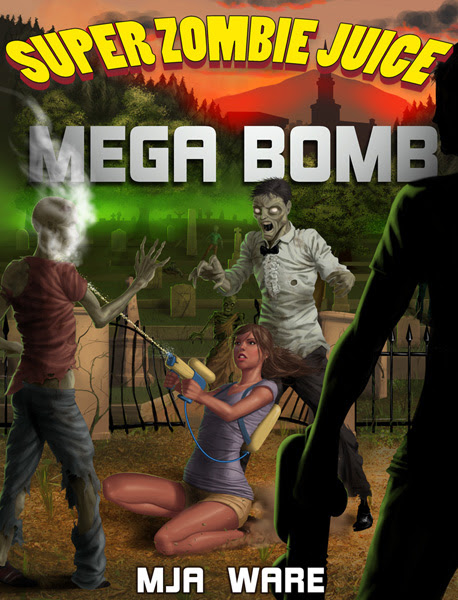 
M.J.A. Ware, known as M.J. to his friends, lives in the foothills of the Sierra Mountains with his wife and two daughters.  He wrote Super Zombie Juice Mega Bomb because he felt there was a need for a zombie book with a broader appeal than just hard-core horror fans. A book that would not only appeal to both adults and teens, but would be teen safe.


When not writing about aliens, monsters and ghosts, he runs a company where he designs award winning video arcades. He’s currently polishing his latest novel, Girls Bite, a paranormal vampire story told from a guy's perspective.
The Interview:


How old are your daughters?

Do they enjoy your books?

One enjoys the cover art; the other likes ripping the pages out. I thought girls were supposed to like vampires rather than zombies.

My eldest loves monsters of all stripes. The first time we took her to a cemetery she was sorely disappointed when she found out there wouldn’t be any ghosts.

Too young, but my wife and I do. I read more ‘chicklit’ than I probably should admit to. Twilight, My Blood Approves, and we both have a weak spot for Meg Cabbot—for me it’s the voice she infuses into her characters.


Does your family inspire you with ideas to write about?

Sometimes. I often write stories that I think would make good books for my girls to read. Having girls makes me more aware of female role models in my writing. I like my stories to have strong women or girls; even if their strength isn’t in conventional ways.


Do you admit to friends and colleagues that you're an author?

I really still consider myself more of an aspiring author. I’m not sure at what point I’d say a self-published author has made it. When they can pay the bills—or at least some of the bills—with their earning, maybe?

So I usually don’t publicize it. I don’t hide it either. When I started my Facebook Author Page they all figured it out. But you know guys, they either don’t acknowledge it, or just say, hmm… cool.


What was your favorite part about writing and publishing a book?

It would have to be the response I've gotten from young people--particularly teens. A couple parents have told me their kids hate to read, but couldn't put the book down. That's what makes it all worth the effort.


When d'you think Girls Bite will come out? (It's a great title)

Thanks. I really want to have it out before the holidays. However, it takes me tons and tons of read-throughs to get a manuscript in shape. I read and edited SZJMB over 100 times. I’m a little more proficient now, but I bet I’ll have to read and revise another 20-30 times before it’s ready.

Realistically, it should be out early next year.


About the book: SZJMB blurb:


After a failed attempt at running away, best friends Nathan and Misty return home expecting to face angry parents. Instead, they discover the military has destroyed the bridges out of their rural town and everyone's fled--except a small horde of the living dead. The stress of flesh-eating zombies may be more than their already strained relationship can handle.


Even with the help of the town geek and lemonade-powered Super-Soakers, there's not enough time to squeeze their way out of this sticky mess. Unless the trio eradicates the zombie infestation, while avoiding the deadly zombie snot, the military will blow the town, and them, to pulp.


Their only shot is something with a lot more punch. Something like the Super Zombie Juice Mega Bomb. But even if their friendship survives, there's another problem: Someone has to lure the undead into the trap.


Where to buy it:
Amazon (print and ebook)
Barnes & Noble
SmashWords
Apple