Relics and Music of Modern Magic

Today I get to post cool pictures in magical colors celebrating the launch of Relics, the first Modern Magics book. Just imagine drawing the curtain back on this image, but what would the music sound like? 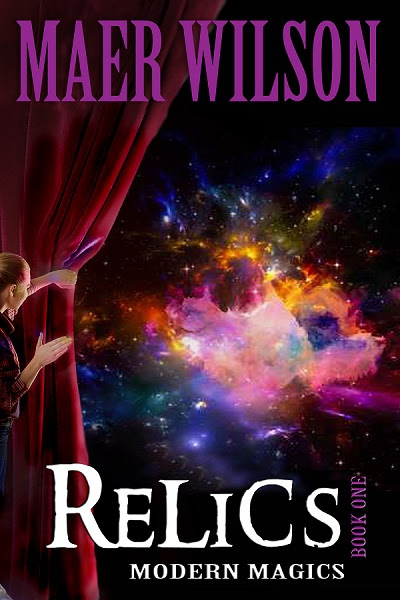 When the creatures of myth and magic return to Earth, they're nothing like your mother's fairy tales, or so I'm told, but here's author Maer Wilson to let us in on the music playing over their return. Welcome to  my blog, Maer.

I can’t imagine writing without music in the background. Not songs, though. Not usually anyway. Words would be distracting and I’d probably find myself copying down lyrics. “When the dead are afraid…I want to swing from the chandelier.” Probably not a good idea. But soundtracks? Oh yeah! Those are perfect.

I listened to a lot of gaming and film soundtracks when I wrote Relics: Book 1 of Modern Magics. I love the Transformers soundtrack and that was a staple during Relics. I also like Adiemus, which is one of the exceptions to my no-songs routine. But because the words are not real, they don’t interfere with the writing process. The language is made up and I love that idea.

As I’ve written the rest of the series, I’ve been adding to my musical library. One group I particularly love writing to is Two Steps from Hell. They have awesome epic music, with vast styles. Those are great for pumping me up. They also have some quieter pieces that work well for more intimate moments.

I discovered the soundtrack to The Elder Scrolls V: Skyrim while I was writing Magics: Book 3 of Modern Magics. It has some wonderful pieces that worked really well for certain scenes.

I also have my old standards - almost anything by John Williams, some of the Cirque du Soleil soundtracks, Howard Shore, James Horner, Hans Zimmer and Thomas Newman, just to name a few.
So what am I listening to right now? That would be my custom station on Pandora. I get introduced to new pieces and songs which is fun. Plus I never know what is going to inspire me or become my latest favorite song or piece.

So what is your favorite music?

I would have the same problem as you Maer, if I listened to songs while writing. I used to listen to my music from my son's computer, back when he still lived at home, but I couldn't say for sure what kind  it was, only that I miss it,and I couldn't hear the words. Now I prefer silence, and my characters fill it with noise, if they can get a world in edgewise above the chaos of leafblowers and squirrels  outside.

Most of Thulu and La Fi's clients are dead. Which is perfect since their detective agency caters to the supernatural. But a simple job finding a lost locket leads to a big case tracking relics for an ancient daemon. The daemon needs the relics to keep a dangerous portal closed. His enemy, Gabriel, wants the relics to open the portal and give his people access to a new feeding ground – Earth. Caught on live TV, other portals begin to open and the creatures of magic return to Earth. The people of Earth are not alone, but will soon wish they were. When Gabriel threatens their family, Thulu and La Fi's search becomes personal. The couple will need powerful help in the race to find the relics before Gabriel does. But maybe that's what ghostly friends, magical allies and daemonic clients are for. When the creatures of myth and magic return to Earth, they're nothing like your mother's fairy tales.

Relics can be found at these retailers:

After a successful career being other people, and later teaching others the many tricks of that trade, Maer Wilson has decided to be herself for a while. Turns out she's a writer. She's always loved stories, especially fantasy, mystery and sci fi. Maer was born in the Year of the Dragon and has a dragon-themed room in her home, but sadly no dragons in the back yard. When she's not writing, Maer plays online video games, teaches college and reads. Maer is a partner in Ellysian Press, a small publishing house. She also co-hosts the literary podcast MythBehaving. Maer lives in the high desert of Southern Nevada with her three dogs, a chihuahua and two poodles. Her books include Relics and Portals, Books 1 and 2 in the Modern Magics series. The upcoming third book in the series is Magics. There are also three novelettes in the series - “Ghost Memory,” “Unwanted Ghost” and “Ghost Dancer.” A fourth story, “Wedding Ghost” is also planned. You can find all books and novelettes in the Modern Magics series at Amazon.   You can find Maer at these links:


a Rafflecopter giveaway
This tour is brought to you by

Find out more, Follow the Tour
and get more chances to win!