Movie, TV or Book for swords and sorcery?

May 25, 2018
Stephen Zimmer is always a very welcome guest on my blog, and I know today will be no exception, so pull up a chair, pour some coffee (or beverage of choice) and join him, right here, right now, with sunlight arising though his book the Depths of Night. Welcome Stephen! 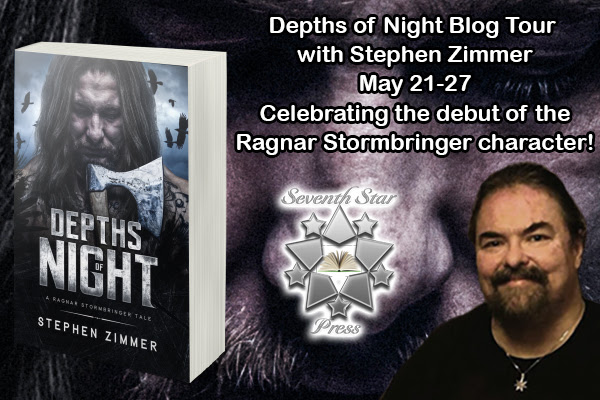 And welcome to the Depths of Night blog tour,celebrating the debut of the Ragnar Stormbringer character. John Le Carre stopped writing about George Smiley after he saw him portrayed on TV, and I know there's a TV pilot starring him. So I had to ask Stephen, how do the TV Pilot and your writing influence each other. And what other influences come into the creation of these characters and their world.

I write both screenplays and prose, so I find it important to state first that visual mediums, like tv shows and movies, and books are as different as apples and oranges.  They are two very different mediums within the greater sphere of storytelling.  Quite often, both are employed for the telling of the same story, or spotlighting a certain character, a dynamic that nowadays can include other distinct creative outlets such as game design and comics/graphic novels.

A screenplay is very minimalist in nature.  It is a blueprint for what becomes a movie, and will involve input, development, and changes from a number of individuals along the way after it has been delivered by the screenwriter.  Directors, actors, producers, and others will affect it in significant ways, and put their own stamps upon it as the production progresses.  It reflects the team-nature of the filmmaking medium.

A book is much more solitary and allows for the introspective, insofar that a writer can go into a character’s head, or provide an omniscient view of a narrative.  An editor becomes involved in the process, but this involvement is different in nature than the various parties that have effects upon screenplays.  The book is the end product, which is different than the movie/tv scenario where the screenplay is part of the beginning of a process that results in the movie or TV show, which is the end product in that scenario.

As a writer who has developed both screenplays and works of prose (in short stories, novellas, and novels), I have a solid appreciation for the differences of the two mediums and the mindsets needed for writing in each of them.

The writing of the Rayden Valkyrie: Saga of a Lionheart TV Pilot represented the first instance where I developed a storyline involving a world and characters from my prose writing.  My grasp of the world of Rayden Valkyrie was very thorough when I wrote the screenplay, and certainly provided a great foundation for the new characters that emerged in the TV Pilot’s storyline.  Yet whether book or movie, I still have to have a comprehensive vision and understanding of a character, and their world, in order to bring it to life in a story.

This resulted in having a back story for the Ragnar Stormbringer character that emerged for the screenplay.  The more I thought about that back story, the more interested I became in developing and telling it further, which lead to the desire to begin telling Ragnar’s story in dedicated works of prose.

This, ultimately, is what led to Depths of Night, the forthcoming When the Cold Breathes, and other novellas and novels that I have envisioned that center around the Ragnar character.

All of these projects give me more opportunities to explore the character of Ragnar Stormbringer, which brings further evolution.  Just like with any person, the more time that I spend with Ragnar, the better I get to know him.

Ultimately, though, whether screenplay or book, everything boils down to the core of the character and the type of story being told.  In this case, that entails heroic fantasy and sword and sorcery, of a kind where I have had many wonderful literary influences including the likes of Robert E. Howard, David Gemmell, and R.A. Salvatore   Powerful heroes, great fight scenes, action-driven plot lines, monsters, and sorcery thrive at the center of these kinds of tales, and it is no different with either my Ragnar Stormbringer or Rayden Valkyrie tales.  What I have to do as a writer is put my own stamp on these tales, and bring them out in my voice, in a way that connects readers strongly to these characters.

Being a filmmaker and writing screenplays has given me a cinematic perspective that definitely lends a hand in writing these kinds of tales.  I think the fact that I first explored Ragnar’s character in a screenplay, where you can only “show” and can not “tell” proved to be valuable in portraying him on the page later in my bookish realms.  It drove me to understand him at a depth that I could not put on the screenplay page, which served as a genesis for all kinds of story ideas involving Ragnar, including Depths of Night and the forthcoming novella, When the Cold Breathes.

In the creation of books or short stories, I can welcome the more interior aspects of Ragnar’s character and get them across on the page to readers.  The depth of understanding gained in the earlier stages is given an unbridled outlet in the writing of something like a novella.

I have really enjoyed my adventures with Ragnar and that is what is paramount in continuing these tales, though it will be interesting to see whether certain expectations develop in new readers who have first encountered Ragnar on the screen (where he is played by Brock O’Hurn in Rayden Valkyrie: Saga of Lionheart).   That will definitely be another new experience for me, but I am absolutely committed to telling the story of this fascinating, heroic character, through whatever mediums I am given the chance to!

I've not read this book yet, but I've enjoyed many of your other books, especially the Rayden Valkyrie novels. They take me back to college days when I too was hooked on Swords and Sorcery--Michael Moorcock and Fritz Leiber being my favorites then.

Thank you so much for answering my question so fully, and giving me an insight into what goes into those TV pilots too. And best of luck with the release. 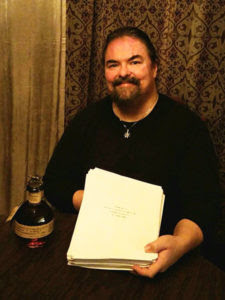 About the author: Stephen Zimmer is an award-winning author and filmmaker based out of Lexington Kentucky. His works include the Rayden Valkyrie novels (Sword and Sorcery), the Rising Dawn Saga (Cross Genre), the Fires in Eden Series (Epic Fantasy), the Hellscapes short story collections (Horror), the Chronicles of Ave short story collections (Fantasy), the Harvey and Solomon Tales (Steampunk), and the forthcoming Faraway Saga (YA Dystopian/Cross-Genre).

Stephen’s visual work includes the feature film Shadows Light, shorts films such as The Sirens and Swordbearer, and the forthcoming Rayden Valkyrie: Saga of a Lionheart TV Pilot.

Stephen is a proud Kentucky Colonel who also enjoys the realms of music, martial arts, good bourbons, and spending time with family.

About the book: Depths of Night: After a harrowing end to a long sea journey, the famed northern warrior Ragnar Stormbringer and a force of warriors step ashore in the lands of the Petranni, a tribal people known for their workings in silver and gold. The search for plunder takes a sharp turn when homesteads, villages, and temple sites show signs of being recently abandoned.

When it is discovered that the Petranni have all taken refuge within a massive stronghold, Ragnar and the others soon fall under the shadow of an ancient, deadly adversary. Wielding his legendary war axe Raven Caller, Ragnar finds his strength tested like never before.

Where to find it:
Kindle Version
https://www.amazon.com/Depths-Night-Ragnar-Stormbringer-Tale-ebook/dp/B07BN9QRS8/
Barnes and Noble:
https://www.barnesandnoble.com/w/depths-of-night-stephen-zimmer/1128335131?ean=2940159032843