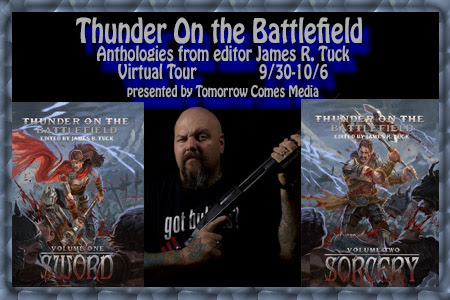 Today is your chance to meet Jeffe Kennedy, one of the authors included in the Thunder on the Battlefield anthologies, right here on my blog. A two-volume anthology, Thunder on the Battlefield offers great Sword and Sorcery tales, just waiting to take me back to the Dungeons and Dragons of my student days. I almost want to get on my bike and visit a friend again, shove the furniture aside, sit cross-legged on the floor, and roll my dice with nervously trembling wrist as the tale is spun...

But instead I'll sit at Jeffe Kennedy's feet and learn how a call for stories in an anthology can come at just the right time to help an author explore her characters. Over to you Jeffe...

When I saw Tuck’s call for stories for his Sword & Sorcery anthology, I’d recently completed The Mark of the Tala – and sold the trilogy, The Twelve Kingdoms – to Kensington Press. Mark of the Tala wouldn’t come out until the following June (2014), but I’d sketched out the arc of the trilogy for my agent and editor. So my characters – the three daughters of the High King – were heavy on my mind.

Particularly, their mother, who died while birthing the youngest, had become this larger-than-life, absent character: Salena, a woman and sorceress whose great influence continued to extend past her grave.

I’d realized that I needed to put her story together. Certainly, I found myself in the position of laying out exactly what kind of bargain she’d originally made with General Uorsin, the man who eventually becomes High King – with Salena’s help. Tuck’s anthology offered me the perfect opportunity to do so, and in a short-story form. I started as a writer with short stories and essays, so it felt like coming home to write something short again.

But I worried a little if the story would be “right” and if it would fit in Tuck’s anthology. After all, though Uorsin carries a sword, he’s just been wounded in battle. He’s not going to be swinging that sword anytime soon. And Salena, though she uses her innate magic to trap Uorsin, there’s not a lot of shapeshifting or spellcasting to be done once she has him where she wants him.

There’s a reason the story is called “Negotiation.” They battle it out, all right, but with words and wit. They’re two people who are strong-willed to the point of obstinacy, used to power, accustomed to getting their way. Though they come to respect each other as a worthy adversary, there’s no love lost between them. In the end they come to an agreement – one that will affect the future of the Twelve Kingdoms for decades to come.

It’s a story about politics.

To my great relief, Tuck loved it and, to my great pleasure, decided to lead off the “sorcery” side of the dual anthology with my story. So much for the great stock Uorsin puts in his sword – Salena and her sorcerous ways won the day.

I suspect she’s quite pleased with that outcome.

I suspect readers will be pleased too, and I'm looking forward to settling down on a sofa with both books and eager fingers turning the pages...

More about the author, Jeffe Kennedy:

Jeffe lives in Santa Fe, with two Maine coon cats, a border collie, plentiful free-range lizards and a Doctor of Oriental Medicine. Jeffe can be found online at her website: JeffeKennedy.com or every Sunday at the popular Word Whores blog.

She is represented by Pam van Hylckama Vlieg of Foreword Literary.


Thank you so much for visiting my blog, Jeffe, and for letting us in on the secret swords and sorceries of your characters.

And now, there are lots more interesting posts floating around the internet about these great anthologies, so please read on, dear reader, with trembling hands and multi-facted dice held ready to roll, as you find out more... 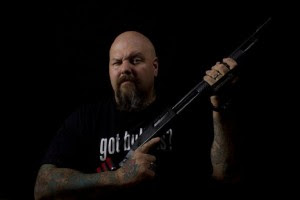 Anthology Editor, James R. Tuck: James R. Tuck was born and raised in The South. Brought up on a steady diet of country music, Jesus, and guns; he's always been a little weird. Now he writes yarns about monsters, guns, hard-eyed men, and tough as nails women. He puts the DARK in Dark Urban Fantasy. 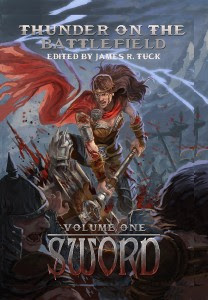 About Thunder on the Battlefield: Sword Book Synopsis: HARK! to the sounds of battle. Mighty men and women who take their destinies with the strength of their arm and the sharpness of their blades. These are tales of warriors, reavers, barbarians, and kings. Lands of wonder populated with monsters, black-hearted sorcerors of Stygian power, and heroes who have blood on their hands and on their steel. This is SWORD AND SORCERY. Edited by James R. Tuck, acclaimed author of the Deacon Chalk Novels, the Sword volume features tales from the following authors: 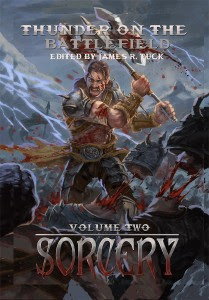 About Thunder on the Battlefield: Sorcery Book Synopsis: BEHOLD! the clash of war. Steel upon steel and heroes fighting shield to shield. The only true victory is a brave death and the destruction of your enemies. These stories harken back to a barbaric past that never was. A time when heroic men and women cut glory from the cloth of a sorcery-filled world and stole gold from the hands of the gods themselves. This is fiction that takes no prisoners. No quarter asked. No quarter given. This is SWORD AND SORCERY. Edited by James R. Tuck, acclaimed author of the Deacon Chalk Novels, the Sword volume features tales from the following authors: 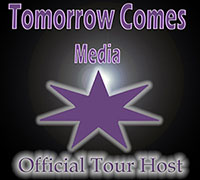 sgzimmer said…
It iswonderful to have Jeffe as one of the authors in these anthologies! ;) Thanks for hosting her!
September 30, 2013 at 8:06 AM

Sheila Deeth said…
Thank you Jeffe. I really enjoyed your post... and my wrists are still itching to roll those dice again...
September 30, 2013 at 8:26 AM