Making Stuff Up: How one Author gets from beginning to end before it's too late

Today I'm welcoming Eric Garrison, author of Four 'Til Late, on his Tomorrow Comes Media tour. He's telling us about the joys of planning, pantsing, and generally telling stories. So... do you like to know the end of a story before you read the beginning? Are you one of those readers who always has to check out the last page first? Or would that seem like cheating? Even heresy?

What about when the author knows the end before the beginning? We trust our authors to have an end in sight when we start to read. But do authors have to know where they're going before the story begins, or might directing it be part of the craft?

Over to you Eric, and thank you for visiting my blog:


Making Stuff Up: Planning, Pantsing, and Me

In any writing circle, writers, especially novelists, self-identify as planners or pantsers. It seems to be as fundamental a division as eye color, handedness or Star Trek vs Star Wars fandom.

Planners want to know every detail of the story's path before they start to write. They do charts of story arcs, character arcs, do questionnaires to flesh out character histories and family trees. The framework of their outlines is as detailed and solid enough to make a computer programmer cheer with recognition. It's sensible and has many advantages. The writer need not keep all those details in her head. She can refer back to it later if the main character's cousin's dog's breed gets forgotten by Chapter 37. Often, the book's synopsis can be created with little effort from this planning.

There are many varieties of planner, from simple outliner to fans of Scrivener software to devotees of the Snowflake Method. I'd only recently heard about the Snowflake Method, it's intriguing and seems like a wonderful way to approach a big project by successive approximations, each pass adding and refining the story more detail until you have a novel. I may have to try it sometime.

On the other side of the coin are the pantsers. Writing by the seat of the pants is the oldest form of the art, predating the written word. I was at a writer's retreat once, and sat in slack-jawed awe, listening as one of the other writers there spun a story *live* for all of us sitting around. Just made it up on the spot. No notes, no paper, no computer, nothing but her brain and her voice. And it was good. Sure, had it been written down, it would have needed editing and trimming and such to make it more readable and suitable for publication. But this was a raw, improvisational exercise that held the room spellbound as the oral story unfolded.

My first couple of novels, including Four 'til Late, were entirely pantsed. With Four 'til Late, I started out with a concept: an amateur ghost hunter protagonist and his friends set out on a haunted road trip. I had no idea what was causing the haunting at first, all I knew was they'd be beset by supernatural troubles the whole way from Indianapolis to New Orleans. A couple of chapters in, after the characters interacted with each other, I discovered what kind of people they were, what the main character's history with each was, and this made the source of the hauntings more obvious to me. All I had to do was steer the story toward the hazy ending this suggested, and with each passing chapter, it became more and more inevitable in my head.

Of course, a pantser isn't free at that ending. No, instead of doing all the structural work up front, they save it for the end. Having made up a full story, they can go back and revise and refine the story, hack out parts that don't fit, build up new parts to better support the ending, and so on.

I said my first couple of books were pantsed. I have not become a detailed planner, but I've seen the value of at least a little preparation before starting down the road to writing the novel. I do what I call laying down rails for the story to run along. Similar to the Snowflake Method, I start out very rough, just an idea of a beginning/middle/end in three acts, then I break those down into smaller pieces, what I think will become chapters. At the very least, this grocery list approach to sketchy outlining lets me know what comes next when I find myself stalling out on forward momentum writing. Pantsing has that risk, and when I wrote Reality Check, my outline was TOO sketchy and I almost gave up on it. Instead, I wrote a grocery list outline for the rest of the book and got my story back on rails and regained my momentum.

So am I a Pantser or a Planner? I'd say I'm still a Pantser at heart, but I like those rails to run my story on. If it jumps the track, it's usually because the story seemed too forced. So, I'll stop at the at point, see where the new direction is taking me, and lay down new rails. I know my way isn't for everyone, but I thought I'd share to show there's not just two ways to approach storytelling. There are many, within and outside of the two broad categories.

Thank you so much for visiting my blog Eric. I suspect I'm half planner half pantser too, and I'm really looking forward to reading Four 'Til Late.

About the Author: Eric Garrison is active in the writing community in Indianapolis, Indiana. He lives in the Circle City with his wife, step-daughter and four cats. He also enjoys gaming and homebrewing beer. Seventh Star Press published the first of his Road Ghosts trilogy, Four 'til Late, in July of 2013. The other two are expected to come out later in 2013. Eric's novel, Reality Check, is a science fiction adventure released by Hydra Publications. This book reached #1 in Science Fiction on Amazon's Kindle store during a promotion in July 2013. Eric's short story, "Drag Show" appeared in the Fall 2011 edition of Strange, Weird and Wonderful Magazine and Volume 2 of that magazine's anthology series. His flash piece, "Dark Reflection", appeared in the Indiana Horror 2011 anthology. He's competed twice in the Iron Writer Challenge with two 500-word flash pieces, "Killer Cure" and "Moby Me".

About the Book: In Four 'til Late, amateur ghost hunter Brett and his friends Gonzo, Jimbo, and Liz are on a road trip with dangerous detours, dreadful dreams and dire warnings. But that won't keep them from reaching their goal: New Orleans. Along the way they discover that some spirits leave you with more than a hangover and regrets. Can they get there in one piece, or will they be stopped and rest in peace? The bags are packed, the engine's running. Turn up the radio and get moving because the road ghosts are waiting, and it's Four 'til Late. Four 'til Late is the first book of the Road Ghosts Trilogy. 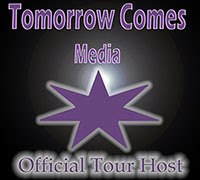 Sheila Deeth said…
You're very welcome Eric. I really enjoyed your post--I'm kind of a pantser / plotter mix, having learned to my cost how hard it is to tidy up timelines when I've edited them too often without a calendar.
September 27, 2013 at 10:52 AM

Today I have a very special virtual guest, reluctant inhabitant of a virtual (blue) world. So hang on to your keyboards and I'll pass you over to author R. J. Sullivan as he meets with... Blue. Welcome to the next installment of the blog tour, this time a topic by request, an interview with Blue, AKA Fiona Shaefer, the protagonist of Virtual Blue and its preceeding novel, Haunting Blue. RJ: Blue, how would you describe yourself? Blue: Wow, jumping right in with the tough ones, aren't you? I guess it depends on "when" we're talking about. When I think back to 2010, I was a senior in high school, very sure of myself. I remember being so damned angry at everything. Now I get a little embarrassed when I remember that. RJ: Why? Blue: Well, gee, if this is how it's going to go, maybe you should ask me to pull up a couch. [smiles] . It's okay, I've been to therapy, I can call myself crazy. RJ: Are you crazy? Blue: Well, *I
Read more

Novels for a Brighter World

Today I'm delighted to welcome author Steven L. Shrewsbury back to my blog with his new, action-packed heroic fantasy novel, Killer of Giants! I've been a reader and fan of myths and legends, swords and sorcery, and dark fantasy since childhood, so I know I will love exploring this first story of the Keltos warrior Rogan! But... is there light in the darkness? Over to you Steven Novels for a Brighter World By Steven L. Shrewsbury I have in my bio that I seek after brightness in this world wherever it may hide. I know what I meant when I said it, but was asked recently what about this new book of mine, KILLER OF GIANTS adds to the world’s brightness. It’s a book, a story, a yarn that will take you away from the mundane stuff of everyday life. One doesn’t need to look at social media, wonder which spoiled Hollywood celeb is sleeping with who or slapped who…or how many people are killing each other in Asia. All the arguments over silly political nonsense that distracts people
Read more