What is New Adult Fiction, with Alexandra Lanc 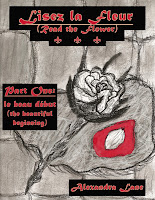 Have you ever wondered what "New Adult" fiction means? I came across the genre when I mistakenly classified a book as Young Adult while posting a review--a fellow reviewer was most ardently furious with me. So when  Alexandra Lanc, who writes New Adult fiction and has a new series just coming out, agreed to be a guest on my blog, I was delighted to be able to ask, at last, just what is New Adult. Her reply makes perfect sense, and I shall be far more able to avoid offending fellow reviewers of NA books in future. Thank you Alexandra, good luck with what looks like a fascinating series--and a fascinating twist on reader involvement... Now, over to you...

My writing has always, ever since I finished writing my first novel when I was thirteen, had one central theme: the emotional journey that my characters go through, and how they grew up during their journey; how they changed from fearful spectators to heroes and heroines, or how they switched from uncaring people to people who would do anything for those they loved. And, along with this theme, my writing always centered around one age group of characters: characters that were usually 16-23, making their way into the adult world. While the Young Adult genre had started booming right around the time I first published (or a little before, reaching its peak then), it wasn’t until recently that I really found the genre that was right for me, and for these characters: the New Adult genre.

What is the New Adult genre? Some of you may be scratching your heads at the mention of it, and that’s alright – I was exactly in your shoes a few months ago, when I finally decided to publish Lisez la Fleur: Part One, the novella that would be my first “official” NA release (though I have other NA books published, and simply had to change their genres; it’s amazing what discovering a new genre will change for you).

The New Adult genre has a lot of classifications, as do the YA, Teen, Middle-Grade, and Adult (and so on and so forth) genres, but I really want to use this post to tell you what NA is to me, an author who loves these stories because they focus on my favorite thing to write about: growing up.

The term “New Adult”, I think, means “becoming an adult”, that stage where you transition from having either no or little responsibility to having a lot of responsibility, where you learn what real love is, what it means to sacrifice, what it means to find your place in the world, and what it means to make your own decisions, and to take your own stand on pressing issues and for things that are important to you. New Adult books usually center around characters who are either just finishing High School, or who are into their higher education – Lisez la Fleur focuses on a girl who is just about to start her higher education (a little later than most), and who is still dealing with the death of her father, standing up to her emotionally abusive mother, and the idea that she is leaving her little brother, whom she’s had to basically care for since her father’s death (I won’t mention the added thrill of France, vampires, and other terrible and heart-pounding things; oh, I did mention it, didn’t I?). New Adult is a growing genre, and where right now it’s mostly Contemporary fiction, it’s blossoming further into a world where older (but not seasoned adults, not people who are already familiar with adult life) characters explore the world around them.

To me, writing New Adult fiction is a dream come true. I enjoy reading and writing YA fiction, because there’s something to be said for the younger readers and their reading (I love Middle-Grade, too), but my heart really lies with the New Adult genre, where I can tell the tales of characters who are coming into their own; coming of age stories where anything can happen, and where emotions are the main focus.

It’s my hope that as this genre grows, and as I write more, I can tell these tales, and not only entertain my readers, but maybe also help struggling readers who are in the same position as my characters are. Literature always has something to teach us, and the gift of good reading is, as an author, my favorite gift to share.

Twenty-year-old Lorine Stringfield’s life is about to change forever, and she doesn’t even know it.

Weighted down by the death of her father, her overbearing mother, and the sadness of her little brother, Lorine has less than high hopes for her family’s trip to France. But all of that changes when she is invited to visit the illustrious Château du Jumeaux – a premiere nightclub that only the most privileged attend. Lorine jumps at the chance to do something for herself, but gets more than she bargained for when she discovers the terrible truth: the chateau isn’t a nightclub at all, but a feeding ground for perhaps the most ruthless of beings, the creatures known as vampires.

Part one in the Fleur Passages, a collection of novellas to later be sewn into one novel, The Beautiful Beginning starts the epic tale of Lorine. This novella marks the first in a series of ebooks in which readers can take part with "Reader Participation" -- inside of the ebook there is a question directly linked to the next volume in the Fleur Passages, and readers can vote for their favorite answer, to have a say in what happens next!

Alexandra is a New Adult and Young Adult author who loves writing Fantasy, Science-Fiction, and traditional Horror stories (though she’s known to dabble in Contemporary and Poetry, too). She started writing at a young age, and is inspired by fellow writers (hats off to Eoin Colfer, Ridley Pearson, J.R.R. Tolkien, C.S. Lewis, Madeleine L’Engle, and Jeanne DuPrau), her writing friends, and her dreams.

She is currently working on many series and stand-alones, most notably the Snowflake Triplet, her YA Fantasy/Christmas series, the Phantasmagoria Duet, her NA Fantasy series, and of course the new NA novella series the Fleur Passages, later to be sewn into one book, where readers have a say in what happens next through voting!

Alexandra is also an artist (her art is featured on her book covers), and a screenwriter, a Whovian, superhero fan, and all-around geek who loves old videogames. Alexandra lives in Florida, USA, with her family and calico cat, Sanura.

Anonymous said…
Thanks for hosting, Sheila! The post looks great. :)

Yes, I'm into New Adult too...With my Phoenix Heritage series (I also designed the covers...Less fantasy than yours...)