September 30, 2012
I like fantasy. I like to read while lying prone on the sofa (kindles are so much better than desktop computers for this). And I'm plunging into the world of being a published author (though Divide by Zero is a contemporary drama, no fantasy there). But what is fantasy proneness, and dare we take the plunge? You've got to admit Steve Finegan has a catchy title there for his guest post on my blog and I'm delighted to welcome him here. You'll be delighted too as you read his article (below) and learn to measure how fantasy prone you are. 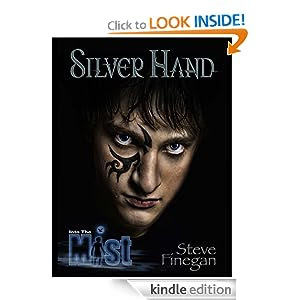 Steve Finegan is writer living in Portland, Oregon. He is the author of INTO THE MIST: SILVER HAND, the first book in a two-part series (the second book is due out next year) that features Gabe, a young hero with epilepsy, whose best friend Ellie thinks his “weird brain” gives him supernatural powers. This novel explores the hidden gifts and abilities many of us possess, as well as the misty border realm between fantasy and reality.

I reviewed Into the Mist: Silver Hand a little while ago (click the link for my review) and I've just enjoyed a fascinating visit to Steve Finegan's website (http://www.stevefinegan.com/). Meanwhile, I really enjoyed this guest post from Steve. I hope you will too. Over to you Steve...

“An excess of childhood is the germ of a poem.” – Gaston Bachelard

Think about this for a second: there are people—kids  especially—who can venture into other worlds in much the same way Alice plunges down the rabbit hole into Wonderland (Alice in Wonderland), or Lucy climbs into that old mothball-smelling wardrobe and walks straight into Narnia (The Lion, The Witch and The Wardrobe).

The real-world people who can do this kind of thing are called fantasy prone, a psychological condition said to be behind everything from imaginary childhood friends to grand adventures in fantastic realms and even mystical experiences.

The whole idea that some people might be considered clinically fantasy prone was the brainchild of psychologists Sheryl C. Wilson and Theodore X. Barber, who came up with the concept while studying hypnotic suggestibility back in the early 1980s.

Wilson and Barber observed that their research subjects often showed an over-the-top tendency to fantasize. This got the two so excited that they sat down with these folks and picked their brains about everything from their childhood beliefs in fairies and other imaginary creatures to the number of hours a day each of them spent daydreaming, and much more.

Do you think you might be fantasy prone? To find out, see if you match up with six or more of the following traits...

1. Being an excellent hypnotic subject.
2. Having imaginary playmates as a child.
3. Fantasizing frequently as a child.
4. Adopting a fantasy identity.
5. Experiencing imagined sensations as real.
6. Having vivid sensory perceptions.
7. Reliving past experiences.
8. Claiming psychic powers.
9. Having out-of-body or floating experiences.
10. Receiving poems, messages, etc., from spirits, higher intelligences, and the like.
11. Being involved in “healing.”
12. Encountering apparitions.
13. Experiencing hypnagogic hallucinations (waking dreams).
14. Seeing classical hypnagogic imagery (such as spirits or monsters from outer space).

I didn’t quite make it over the bar. All I can say for certain is that I fantasized a lot as a child, and part of this was pretending to be various characters out of the books I read. I especially enjoyed playing Alexander the Great and conquering the world with my broomstick spear and garbage-can-lid shield, but that was more playacting than it was adopting a fantasy identity. The terrors of the night were more likely to conjure up fantasies in my young mind. There was this hat rack in the hall outside my bedroom door that used to stalk me at night, and I heard whispered voices and footsteps in the attic above my bed, but I think this sort of thing is pretty typical.

How’d you make out?

Turns out a number of studies have found an overlap between certain types of mental illness (e.g., dissociation disorder) and fantasy proneness. Of course, like many so-called disabilities, fantasy proneness also might be considered an ability or gift. It has been suggested that people who are predisposed to be fantasy prone also demonstrate high degrees of creativity and include actors, artists, and writers.

Just in case you were wondering where Steve got his facts from, here are some sources to prove this is genuine research:

So, are you fantasy prone? I think I almost am. Thank you for introducing me to the concept Steve nd for visiting my blog--oh, and for letting me read and review your book!