How Good Are You At The Art Of Negotiation? 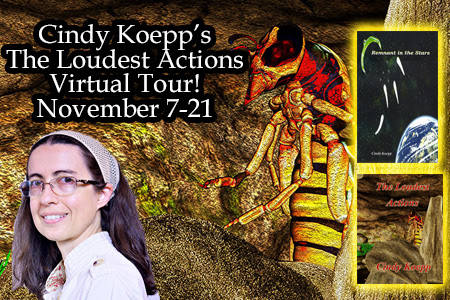 
I have some fascinating guests on my blog today. If you sit quietly - don't slurp your coffee - they might just teach you something of the gentle art of negotiation. Cindy Koepp, author of Remnant in the Stars and the Loudest Actions, asked them to visit here, and I'm very grateful to her. You might want to go and find Cindy's books (http://ckoepp.com/) after you've met these characters. But first, over to you Cindy, Ella, Burke and Sacaran.

The Art of Negotiation

Ella Font (EF): Good morning, everyone. My name is Ella Font with the Interdimensional News Network, and I’m here today with Coalition Ambassador Burke Zacharias and Aolanian Ambassador Sacaran Asiki Raman. They are the negotiators for the Coalition and the Aolanians, and they’re headed out to meet some potentially new friends. Hello, Ambassadors. What can you tell us about the mission you’re on?

Sacaran Asiki Raman (SAR): We find two of the major civilizations, and we go to introduce ourselves and form an alliance, if we can.

EF: How did you find out about them?

SAR: (leans closer) What do you say?

EF: (louder) How did you find out about them?

BZ: (mutters) And evidence that the League was there ahead of us.

EF: It’s pretty safe to say that the locals won’t speak any language we do. How will you handle communicating with them?

BZ: Well, I’ll have to work on learning their language, and hopefully they’ll be interested in learning ours.

SAR: There is also value in having a linguist or other people with you to learn the language as well. Some people have greater ability in languages. They serve as translators, if necessary.

BZ: (Scowls) No. Absolutely not. There’s too much danger in using a translator.

SAR: Using a translator is an acceptable solution. I do not say it is ideal, but it is possible. I have used this strategy before with success.

BZ: (Shakes his head) Too many layers of separation between the negotiator and the local representative. No. Too dangerous.

SAR: (Squints up at him) Then I hope your facility for languages is excellent.

BZ: (Crosses his arms over his chest) I’ll do well enough.

EF: (Looks back and forth between them) I see, well, um, if everything works out as it should, what do you hope to accomplish?

SAR: (shakes her head. Slips a weathered fingernail under the edge of a silver disk on her head and pries it lose, makes an adjustment and puts it back on and winces). Again?

BZ: She wants to know what we’ll accomplish, and you’re worried about me communicating? Well, Ms. Font, ideally, a full alliance. We don’t want the League to have control of the planet in any way. If that doesn’t work, at least a trade agreement. We could certainly use another friendly source of resources. Most of the asteroids are mined out, and the trans-Neptunian objects are tougher to mine.

EF: What do you say to critics who think the Coalition should avoid any sort of military-based treaty?

EF: They’re saying that the Coalition should not be provide for the defense or protection of any but our own world and our colonies.

SAR: I say that has short sight. Each member of an alliance must do the thing they are best at. Asking my people to provide defense is foolish at best. Aolanians, though, are very good stellar cartographers and astrogators, something humans struggle with when a computer is not available to help with the numbers.

BZ: To a point, Ambassador Raman is correct. The Coalition can’t spread itself too thin, but at the same time, we can’t have our allies being destroyed by the League.

SAR: We see what the locals are like when we encounter them. They are, perhaps, stronger than we expect. Arriving at the conclusion without sufficient data does not give favorable results.

BZ: (mutters) Something we agree on?

EF: Well, um, that’s all we have time for today. Thank you both for joining us, and good luck on your mission. This is Ella Font, and you’re watching the Interdimensional News Network.

And I do hope their mission communications go well!


About the author: Originally from Michigan, Cindy Koepp has a degree in Wildlife Sciences and teaching certification in Elementary Education from rival universities. After teaching for fourteen years, she pursued a master’s degree in Adult Learning with a specialization in Training and Performance Improvement. Cindy has five published science fiction and fantasy novels, a serial published online, short stories in five anthologies, and a few self-published teacher resource books. When she isn’t reading or writing, Cindy spends time whistling with a crazy African Grey. Cindy is currently working as an optician in Iowa and as an editor with PDMI Publishing and Barking Rain Press.

About the Book: Remnant in the Stars: Two hundred years ago, the Aolanian home world exploded and a remnant of survivors escaped.

As their convoy combed the galaxy looking for a new world to colonize, they discovered Earth and were given permission to establish a temporary base while they continued their search for a new home world. When an Aolanian exploration vessel goes missing after transmitting a garbled distress call, the uneasy alliance between the humans and the Aolanians is put to the test as two anti-Aolanian groups jockey to use this opportunity to press their own agendas by foiling the rescue mission.

Because his daughter was onboard the Kesha when it vanished, Calonti Sora reluctantly signs on as an astrogator with the Gyrfalcon, one of the ships in the search party. There he meets up with an old human friend, Kirsten Abbott. Together, they work to overcome prejudice and political plots as they race toward an enemy no one could expect.

Find it on Kindle at 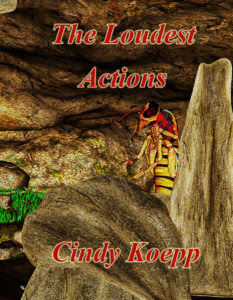 About the Book: The Loudest Actions: First contact missions are hard enough, but they get even tougher when the negotiator has an ego the size of a gas giant.

Burke Zacharias, a first contact researcher, is chosen to spearhead humanity’s first official contact with Montans, an insect race that has already had a run-in with less friendly humans. Although his words and overtures toward the Montans are cordial enough, the Montans are put off by how he treats the crew of the scout ship that brought him to the world.

With other, less friendly forces trying to establish a foothold on the world, the negotiation must succeed in spite of Burke, or the Montans could be facing extinction.

Find it on Kindle at
https://www.amazon.com/Loudest-Actions-Cindy-Koepp-ebook/dp/B01L60SZDQ