Best friends with fur and feathers 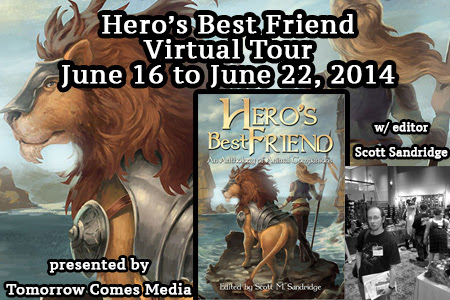 Today I'm delighted to take part in the Hero's Best Friend blog tour, not just because it's a cool book with lots of great stories, and super animals, and a wonderful cover, but also because my first Hemlock tale ever to find its way into print is part of the anthology. So buy this book! Please! I'm totally unbiassed :) Author Essel Pratt is totally unbiassed too, and here he is to tell you about his tale of an animal companion/brother.

Over to you Essel, and thank you for visiting my blog!


As a writer, I find myself focusing predominantly on the horror genre.  The freedom that it allows seems to open up the gates to my imagination, allowing ideas to spill from within.  Despite a horror focus, I am also a diehard fan of fantasy and adventure.  When I saw the open call for Hero’s Best Friend, I was immediately drawn to creating a submission.
At first, I was not sure what to write.  I didn’t want to re-create Lassie from the dog’s point of view.  I wanted to show the brotherhood of man and beast.  I wanted to give true substance to the animal companion and allow him to be equal to his human brother.  This is how “Brothers” began.
I envisioned a world where both man and dog, in this case a wolf, could be equals and travel alongside each other without seeming abnormal and out of place.  I figured that a world after technology had ceased to exist and magic made its triumphant return was the perfect scenario.  However, I did not want it to become a goofy conglomerate of farce.  So, I took a more serious approach to the story and placed it in a setting after a great battle, allowing it to become more somber in nature and portray the brotherly love between the boy and his wolf.  I will admit, there were times that I got tear eyed while dreaming up the story and writing the words.
During my writing process I observed both of my huskies quite a bit, studying their mannerisms and their expressions.  Both of them (Ripley Bion and Sir Castiel, Lyric of Oberon) provided me with an emotional attachment to the story.  After allowing the final product to simmer for a bit, I re-read the story and fell in love with it again.  I couldn’t wait any longer and submitted it with my fingers crossed for good luck.  Needless to say, I was overjoyed when I received the acceptance email from the guys over at Seventh Star Press.
Despite the joy of acceptance and the anticipation of seeing my piece in print, the characters and story would not leave me.  I began to envision the events that led up to “Brothers” and soon began to outline them in detail.  Over the course of the next year, or so, I crafted the back story in approximately 23,000 words. Then I went back through the story again and added about 10,000 more.  I changed a lot, from the character’s names to their heroic demeanor, but stayed true to the theme of “Brothers”.  I wanted so bad to submit the book for consideration toward publication, but did not know where I stood contractually.  To my relief, upon querying with Seventh Star Press, I received the go ahead to query the book wherever I pleased.  They truly are the perfect example of what a “good guy” in the publishing industry should be.
With permission to submit, I sent the book to J. Ellington Ashton Press to test the waters.  To my surprise I received an acceptance!  The name of the book transitioned from “Brothers” to “Final Reverie” and has expanded to nearly 50,000 words! Set to release this summer, I could not be more excited at the transformation from a short story that became my obsession to the full novelization of the story.
I urge anyone reading this post to pick up your copy of Hero’s Best Friend.  If not for my contribution, “Brothers”, then for the many other amazing stories within.  However, if you would like a preview of what is to be released in Final Reverie this summer, reading “Brothers” will hopefully whet your appetite for more!


You've certainly whetted my appetite just with this. I wish I had a picture of your huskies to add to the post!

About the editor: Scott M. Sandridge is a writer, editor, freedom fighter, and all-around trouble-maker. His latest works as an editor include the Seventh Star Press anthologies Hero’s Best Friend: An Anthology of Animal Companions, and the two volumes of A Chimerical World, Tales of the Seelie Court and Tales of the Unseelie Court.

Book Synopsis for Hero’s Best Friend: How far would Gandalf have gotten without Shadowfax? Where would the Vault Dweller be without Dogmeat? And could the Beastmaster been the Beastmaster without his fuzzy allies? Animal companions are more than just sidekicks. Animals can be heroes, too!   Found within are twenty stories of heroic action that focuses on the furries and scalies who have long been the unsung heroes pulling their foolish human buddies out of the fire, and often at great sacrifice-from authors both established and new, including Frank Creed, S. H. Roddey, and Steven S. Long.

Whether you're a fan of Epic Fantasy, Sword & Sorcery, Science Fiction, or just animal stories in general, this is the anthology for you!

So sit back, kick your feet up, and find out what it truly means to be the Hero's Best Friend.

Featured in Hero's Best Friend: An Anthology of Animal Companions: