Where do main characters come from? 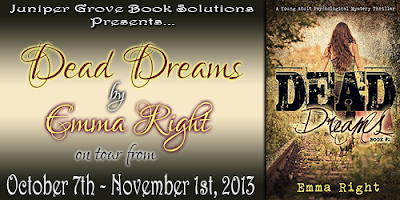 Today I'm delighted to welcome author Emma Right to my blog. Her new book Dead Dreams, a YA psychological mystery recommended for age 11 and up, was released last month, and I'm honored to be one of her tour hosts. There's a tour wide giveaway going on too, so don't forget to follow the Rafflecopter links at the end of this post.

Eighteen-year-old Brie O’Mara has so much going for her: a loving family in the sidelines, an heiress for a roommate, and dreams that might just come true. Big dreams--of going to acting school, finishing college and making a name for herself. She is about to be the envy of everyone she knew. What more could she hope for? Except her dreams are about to lead her down the road to nightmares. Nightmares that could turn into a deadly reality.

I asked the author:

How much of yourself is there in the main character of the novel? And to what extent do you think authors write themselves into the stories they tell?

Please read on to find her intriguing answer:


My characters and their human counterpart.
by Emma Right
Where do main characters come from? All those personalities, like Daisy or Jay Gatsby from The Great Gatsby, or Anne of the Green Gables series, or Katniss from Hunger Games?

It really depends on the story. And I am sure each author has his or her own take on this. 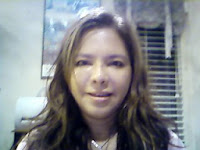 When I wrote my first book, Keeper Of Reign, I extracted some of the traits my kids portrayed and quirks I thought were cute and endearing and included these in some of the conversations and personalities—it is after all a book for kids. But that is about where the similarities end. As the story developed and plots took shape the circumstances the characters in Reign faced helped formed their own personalities. So I can’t say that there was very much in me at all in the main characters of Keeper of Reign.

Having said that, things got a little different with my young adult psychological thriller, Dead Dreams. I see a lot of myself in Brie O’Mara, the main protagonist,  and even in Sarah McIntyre, the anti-hero,  even though both young ladies are very different people.

In some ways, I believe, the author always deposits a portion of herself into the characters—particularly the main ones. Think about it: as the plot falls into place, and as the writer faces the questions the characters are confronted with—what would she do faced with this or that—wouldn’t it be reasonable that the author would reflect her biases into how anything is played out?

Of course, the fictitious person would have a basic personality to start with, say, a moody, pouty girl, used to having the world offered to her on a silver platter and servants hovering around her, as in Sarah McIntyre, but when she is faced with a proposal, say to rid herself of a nagging, persistent boyfriend, how she thinks, is in some part a reflection of what the author thinks. That’s why I feel fiction is so powerful in influencing the thinking of its readers. And every fiction has a message no matter how subtly it has been woven into the story because at the end of the day, it is the author projecting her thoughts, ideas, suggestions, and world view into how the characters would act and react.

So, back to the question—how much of myself is in the two main characters of Dead Dream? I’d say a lot and yet, not so much, too. Because although some of the choices my characters make are things I could have done, but I probably won’t due to my moral choices and governing ethics. For instance, would I ever commit a crime? I could. (For that matter, even the President of the United States could commit a crime and shockingly some have!) But I won’t—it’s a matter of choice.   I think as humans we are not all that different from each other, especially for those of us of a particular culture.

As authors we cannot run away from the fact that we do breathe some of who we are, or what we believe in, into our characters –for both the protagonist and the antagonist. Each facet of the people we populate our fiction with may not necessarily be who we are now, but it can be a glimpse of what the author could be, or even what the author once was.

What a great answer. Thanks you Emma.

I wonder to what extent the way a reader relates to a character might also reveal what the reader could be, or once was. Perhaps that's part of the power of fiction, to influence readers to see beyond the surface details of life.


About the Author:
Emma Right is a happy wife and homeschool mother of five living in the Pacific Coast of the USA. Besides running a busy home, and looking after too many pets, she also writes stories for her children. When she doesn't have her nose in a book, she is telling her kids to get theirs in one.

Right worked as a copywriter for two major advertising agencies and won several awards, including the prestigious Clio Award for her ads, before having children.

Visit Emma Right at her home site and sign for her blog feed and newsletter @ http://www.emmaright.com and blog for tips and ideas about books, homeschooling, bible devotions, and author helps from self-publishing to book marketing. Follow Emma Right on Facebook and "like" her Facebook Fan Page for the latest events. Follow Google Plus emmarightbooks, and Twitter @emmbeliever. She'd love to hear from her readers.

and enter the rafflecopter event for a chance to win a copy, or ecopy of the book, plus Amazon gift card:

And now, to give readers more of a flavor of the book, here's an excerpt from the prolog to Dead Dreams:

They say each dead body, a human corpse, has a scent all of its own, a sweet-sour smell. A cadaver dog picks up the scent as clearly as a mother would recognize the photo of her child. Of course, I wouldn’t know, for I am no dog. I might as well have been, the way I’d stooped to yield to my basic instincts. My mind wandered to her, what her unique smell would be when, and if, they ever were to find her.

After what happened, I decided to write out the events that led to that day and details that might help, in case I’d missed something, or might need it for defense, or in case they found me dead. My relatives might need to piece together the things that had spiraled out of control, if they wanted closure to put me to rest, to forget me altogether. That would be least painful for them. I nodded to myself as I sat in the car. I thought of my most favorite girl in the world: Lilly. At least Lilly’d have my dog, Holly, to remember me by.

My friends used to call me Brie, short for Brianna. But, I could hardly count anyone a friend any more. I’d have to resort to back-watching if I wanted to survive.


To find out more, please follow the links below for the rest of the Dead Dreams blog tour: