Meeting the Children of the Knight 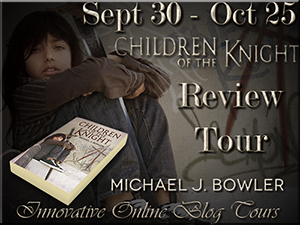 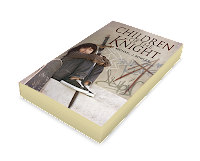 I've just been reading an intriguing book that combines the myths of King Arthur with the gritty realism of LA's gang culture, and holds a dark mirror to the way we treat our children. Innovative Online Blog Tours invited me to join the book release tour, so please read on to find out more about the book, the author, and my review:

BLURB:
According to legend, King Arthur is supposed to return when Britain needs him most. So why does a man claiming to be the once and future king suddenly appear in modern-day Los Angeles?
This charismatic young Arthur creates a new Camelot within the City of Angels to lead a crusade of unwanted kids against an adult society that discards and ignores them. Under his banner of equality, every needy child is welcome, regardless of race, creed, sexual orientation, or gang affiliation.

With the help of his amazing First Knight, homeless fourteen-year-old Lance, Arthur transforms this ragtag band of rejected children and teens into a well-trained army—the Children of the Knight. Through his intervention, they win the hearts and minds of the populace at large, and gain a truer understanding of themselves and their worth to society. But seeking more rights for kids pits Arthur and his children squarely against the rich, the influential, and the self-satisfied politicians who want nothing more than to maintain the status quo.
Can right truly overcome might? Arthur’s hopeful young knights are about to find out, and the City of Angels will never be the same.


Children of the Knight, by Michael J Bowler, has an excellent plotline and a powerful feel for the needs and hurts of inner city children. King Arthur returns, as legend predicted, but to Los Angeles, USA, instead of England, to aid the multicultural youth of a youthful nation rapidly losing its way. The lessons are wise, with an honest no-holds-barred approach to young people and the wounds—physical, sexual, and mental—that drive them to gangs and homelessness, or simply rebellion.  The LA teen voices seem achingly authentic, at least to my English ears. And the mission of Arthur, to restore meaning to life, to offer praise and reward hard work, and to give each child significance, has a powerful message to a culture that punishes as adults those it simultaneously sidelines as children.

King Arthur’s attempts to understand our modern world are nicely drawn, and his opposition to swearing, disrespect (in all its many forms), and careless hurt is nicely convincing. Less so are his accent and dialect, which read awkwardly to my English ears, but probably mirror the confusion of American city kids trying to read Shakespeare. “Gaels didst hate the Galls who didst hate the Normans...” had me wondering whether to check ancient grammar or history first. But “I doth be fine” declares Arthur at another point, and “When canst any of thee recall...” as he proclaims an upwelling call to change to assembled listeners.

The story’s greatest strength is in its depiction of exploited youth, brave children finding their place in a system that’s rejected them, seeking their sexual identities in a world that too freely abuses and condemns, needing approval, and learning to stand up for what they finally believe in. The story is fun and exciting, well-plotted, and pleasingly fanciful, with a blend of gritty realism and idealistic resolution that should appeal to younger teens. Bearing in mind the story’s shadier themes though, this book is recommended more for those who’ve already seen or learned of the darker side of life.

Disclosure: I received a free ecopy during the author’s blog tour, with a request for an honest review. 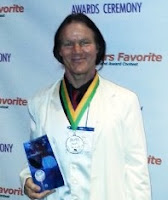 Michael J. Bowler is an award-winning author of three novels––A Boy and His Dragon, A Matter of Time, and Children of the Knight––who grew up in San Rafael, California.
He majored in English and Theatre at Santa Clara University and earned a master’s in film production from Loyola Marymount and another master's in Special Education from Cal State University Dominguez Hills.
He partnered with two friends as producer, writer, and/or director on several ultra-low-budget horror films, including “Fatal Images,” “Club Dead,” and “Things II,” the reviews of which are much more fun than the actual movies. Ha!
He taught high school in Hawthorne, California for twenty-five years, both in general education and to students with learning disabilities, in subjects ranging from English and Strength Training to Algebra, Biology, and Yearbook.
He has also been a volunteer Big Brother to seven different boys with the Catholic Big Brothers Big Sisters program and a nearly thirty-year volunteer within the juvenile justice system in Los Angeles.  He is a passionate advocate for the fair treatment of children and teens in California, something that is sorely lacking in this state.
He has been honored as Probation Volunteer of the Year, YMCA Volunteer of the Year, California Big Brother of the Year, and National Big Brother of the Year. The “National” honor allowed he and three of his Little Brothers to visit the White House and meet the president in the Oval Office.
He has already completed the two continuations of Children of the Knight entitled Running Through A Dark Place & And The Children Shall Lead, and plans to release both in 2014.