January 28, 2013
I just read and enjoyed two books that touch on Easter and Lent, Christianity, history, research and the facts behind the stories. The writers are very different people; their traditions and beliefs probably differ too; but their rigorous investigation, combined with honest faith, tie these books together for me and make me thoroughly glad I got to read read them both. (Click on the pictures to find the books on Amazon) 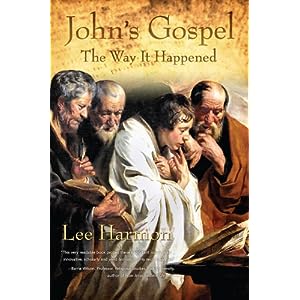 John's Gospel, the Way It Happened, by Lee Harmon, combines two fictionalized accounts with excellent essays describing his research, discoveries and conclusions. In one thread, the aging John argues faith and facts with a much younger, disillusioned Matthew. In another the preacher Jesus faces a path that leads where he may not want to go. And in separate boxes and essays, intersperced throughout the text, readers can find fascinating facts, intriguing comparisons, and enthralling parallels. It's a controversial book, deliberately so, and not one for readers afraid of questions or threatened by disagreement. But John's Gospel is wonderfully thought-provoking (as indeed the book it derives from must have been when first written). While I readily admit I don't agree with all the author's conclusions, I'm truly enthralled by the journey and love this book.

Meanwhile author E. G. Lewis, best known for his wonderful Seeds of Christianity series (a set of fictional novels set in the early days of Christianity, wonderfully researched and bringing faith and history to vivid life), will offer his book, In Three Days, the Ancient Traditions of Lent and Easter, on a kindle deal soon as Lent approaches. This book sets out a series of essays, character studies, analyses, and even recipes (!) based on the author's research into history and science. His Christian faith is clear, but the writing makes this book easily accessible to believers and non-believers. The essays are pleasingly non-combative, inviting question, welcoming curiosity, and open to honest disagreement, making this a perfect book to accompany Lent, or to share with friends when the subject of Easter comes up, whatever your background.

I don't suppose I can really review my own book, but I've got a good book for Lent out there too. Look out for Easter! Creation to Salvation in 100 words a day on Amazon, Barnes and Noble, Smashwords, Createspace etc.
book reviews Lent