What Stephen King Taught Me About Writing, by Andrew Toy 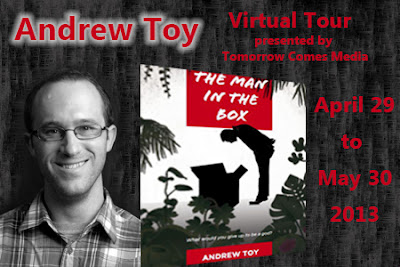 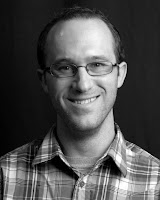 I'm delighted to welcome author Andrew Toy to my blog today, as part of his Tomorrow Comes Media tour. Andrew Toy lives with his wife and dachshunds in Louisville, KY, so I guess, like me, he must like dogs! He's currently editing books of nearly every genre and he's a writing coach for aspiring authors. Andrew and his wife are trying to adopt their first child, and he's using writing and editing to help accomplish this.

Check out some more of his writing and upcoming books
on his popular blog: adoptingjames.wordpress.com,
on twitter: http://www.twitter.com/TheManInTheBox1
or on facebook: https://www.facebook.com/pages/The-Man-in-the-Box/443303069015755

and look for his new release, The Man in the Box (did you guess that from the twitter name?) on Amazon at  http://www.amazon.com/The-Man-Box-Andrew-Toy/dp/161318137X


And now, drum roll, here's Andrew Toy's (and someone else's) most excellent piece of writing advice (don't forget to look for more info and the rafflecopter a the end of this post):


"What Stephen King Taught Me About Writing"

I remember being intrigued a while back by a rather large book (thicker than my Bible, even), called Under the Dome by Stephen King.
Now, I had given Stephen King a chance about two years ago with an older book of his called Pet Sematary (spelling correct). I was writing The Man in the Box at the time and needed some direction on how to write rabid animals gone amuck. Plus, I wanted to give this popular King guy a shot – after all, he can’t be one of the most well-known authors for nothing.
Well, when I got through a bit more than a quarter of the book I did something I hardly ever do: I put the book down and cancelled any further reading of Stephen King.
Not because the book was disturbing (which it wasn’t).
Nor because it was scary (which I kind of hoped it would be).
It was boring!
Almost halfway through the book, no plot had developed, and the characters kept going around in circles with random conversations which I’m sure tied into the end somehow, but I didn’t care to stick around to find out. The book, I felt, was directionless.
I’m a pretty forgiving guy, so I gave King another shot. And surprisingly I stuck his latest monster of a book out - Under the Dome.
At 1,076 pages I was surprised at how quickly I read through it. (I talked to one guy before endeavoring on the long trek who read it all in one sitting on a trans-continental plane ride.) It took me a month or two.
Even though I was reading it for permission to tell my own saga of a story of which the details are to remain mute for now, I found myself getting pulled into the story one sub-chapter at a time.
Kudos to Mr. King for having come such a long way from Pet Sematary. The characters were more rounded out, and from page one he set the plot with a giant invisible dome closing in around a small New England town.
Fast forward several hundred pages.
I think I can, I think I can, I think… I…
I don’t know how many times I mentally  told Mr. King to get on with it! And so wrapped up in the town politics and dirty deeds did the book get that I feel like the author failed to look at the title of the book every few pages or so to remind himself what the book was actually about. (Yes, I realize all the events took place because of the dome, but you can only get off topic to much before you lose me completely.)
A big round of applause, however, for taking a seemingly harmless object (a giant dome) and creating plausible reasons for there to be a bloodbath because of its mere presence. When the book was actually about the dome, it really remained as an ominous, silent threat to all those affected by it.
My biggest criticism is that Under the Dome could have been at least 250 pages shorter. I only finished the book because I had already invested so much time into it. So by the time I got to the odd climax, I was just too tired to care, thus I was unfulfilled, and I missed the larger point Stephen King might have been trying to make.
If you don’t want to invest the time or energy in this dinosaur, but you’re curious nonetheless as I was, you may be pleased to know that Hollywood great Steven Spielberg is producing the miniseries based off the book that will be debuting this summer. I may end up being proved wrong, but the good thing about Spielberg producing is that the miniseries won’t likely be as R-rated as the book is – filled with profanity, innuendoes, mild sensuality, and a couple of rape scenes – not that you need to worry about your kids wanting to scale the peaks of this book.
All in all, what Stephen King taught me in possibly the last book I’ll be reading from him other than his book on writing that has come highly recommended – the irony -(didn’t he write a baseball book? How is it?) is this:
Writers, no matter how many characters you have, no matter how big the plot, no matter how grand a scale your story is,
don’t over stay your welcome.
With that, I’ll be taking my queue to exit the stage.


Thank you so much for letting my blog serve, albeit temporarily, as your stage, Andrew, and for sharing that excellent advice. And now I'm even more eager to read The Man In The Box. I just need a time machine to give me more reading space. 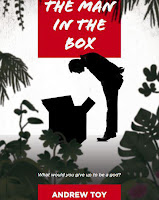 Work provided Robbie Lake the perfect escape from his family. But his life is turned upside down when he is unexpectedly fired. When he finds a new way of escape through a cardboard box, everything changes. The imaginary world of his childhood has evolved in his absence and is now more savage and hostile than even he could have dreamed. Robbie is drawn in by the excitement of his secret world, but will the cost of abandoning his family prove too high?

CA Heaven said…
I think On Writing was a very interesting book. Must admit it's the only book by Stephen King I've read >:)