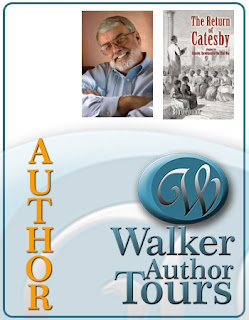 I'm delighted to welcome historian and author Bob O'Connor to my blog today. He's currently on tour with his novel, The Return of Catesby, with Walker Author Tours. Today he's going to tell us about writing historical fiction--a very appropriate topic for me as I continue writing those children's historical Bible stories, so, over to you Bob, and welcome to my blog:

The Return of Catesby

They say “truth is stranger than fiction.” In my case, the combination of truth and fiction make for a really good story.

What I have done with my book “The Return of Catesby” is to write a story based on a real character in history who was a slave. Catesby was owned by Colonel Lewis Washington, a descendant of George Washington. He was a teacher at the newly formed Storer College in Harpers Ferry, West Virginia set up right after the Civil War to teach freed blacks to become teachers. As such, Catesby imparts his knowledge and his story of becoming free to both teach and inspire his students.

As a man who had been actually captured by John Brown, had his own blacksmith shop, escaped slavery via the Underground Railroad, been a United States Colored soldier in the 54th Massachusetts Volunteer Infantry, and had been captured and sent to Andersonville Prison, Catesby had the extensive  background needed to impart knowledge to his students. After all, if a crippled slave like Catesby could succeed, his students certainly could too.

“The Return of Catesby” is available on line at www.boboconnorbooks.com or at amazon.com, or you can pick up a copy at  http://www.buybooksontheweb.com/product.aspx?ISBN=0-7414-8206-1.

About the author: Bob O’Connor is a native of Illinois who now lives near Harpers Ferry, WV. He's been a life-long student of both the Civil War and Abraham Lincoln. As a 7th grader he attended the Centennial of the Lincoln Douglas debates at Galesburg, Illinois. One year later he portrayed Lincoln in his school play. Today he is the author of six Civil War era books. His subjects are Abraham Lincoln’s bodyguard, John Brown the abolitionist, the U.S. Colored Troops and brothers fighting against brothers.

Bob O’Connor’s books (two non-fiction and four historical fiction) depict real people and real events. His research has uncovered a never before published drawing of the hanging of John Brown and a complete 500 page unpublished manuscript written by Lincoln’s bodyguard. He has made over 500 appearances in 18 states and the District of Columbia in the last six years to talk about his books.

Anonymous said…
I like the cover. It definitely has a historic look to it.