Today I get to welcome author J. D. Smith to my blog. Having recently landed on planet earth he has written an invaluable new guide book, Notes of a Tourist on Planet Earth: Being a Collection of Hilarious Essays, Poems and Ponderings about the Human Species. A species worth much pondering perhaps, and a source of much humor too. J.D. takes readers through a satirical tour of the peculiarities in our world, providing fresh and sharp wit to issues like wearing black, bestiality, and rejected menu items from Disney World. A seasoned traveler, scholar of four degrees, award-winning writer, and a contestant on "Jeopardy," the author proves smart is the new funny. Thank you so much for joining us J.D, and for sharing your: 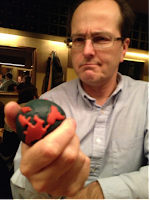 Thank you J. D., and for readers who want to know more about the book:


Author Lands on Planet EarthLaughs, hiccoughs and exclamations of “What the?” await
(WASHINGTON, D.C.) Some questions haunt humanity on a daily basis, or at the very least make it scratch its collective head. Why shouldn’t one wear black? Who is emitting the most greenhouse gases? How can one sound halfway intelligent at an art gallery or survive a poetry open mic?
With the delightful peculiarity of an outsider looking in, award-winning writer J.D. Smith seeks to answer these questions and more in Notes of a Tourist on Planet Earth: Being a Collection of Hilarious Essays, Poems and Ponderings about the Human Species (Cassowary Press, March 2013).
In this collection that includes LOL-worthy selections in poetry, prose and pieces that no genre could even hope to encompass without undergoing elective surgery, J.D. proves that smart is the new funny, humanity is endlessly amusing and the world would be a better place without mimes.
Notes of a Tourist on Planet Earth is a conversation-starter that answers the questions you were too afraid to ask—or didn’t know existed in the first place: What do zombies like to eat besides brains? Or what will a seafood menu look like 40 years from now (minus all the seafood)?
Readers also gain useful knowledge like whom to blame for Global Warming (Clue: She is musically androgynous and has a penchant for wearing meat), and what not to say at wine tastings. Throughout the book, J.D. makes environmental issues like climate change funny, because they’re true, a task seldom attempted, and certainly not by Al Gore.
Deemed funny by people currently residing on both coasts of the United States, London, the West of Ireland and Sarajevo, and a musician who is afraid of clowns, Notes of a Tourist on Planet Earth is based on research in several world capitals, the bars of eight time zones and a distressing number of degree programs.
J.D. SMITH, a seasoned traveler and award-winning writer, has published three collections of poetry, one collection of essays and one children’s book. His work has appeared in Alimentum, The Bark, Gastronomica, the environmental ezine Grist and the Los Angeles Times. His one-act play “Dig” was adapted for film in 2011. He lives in Washington, D.C. with his wife and rescue dog.
guest post