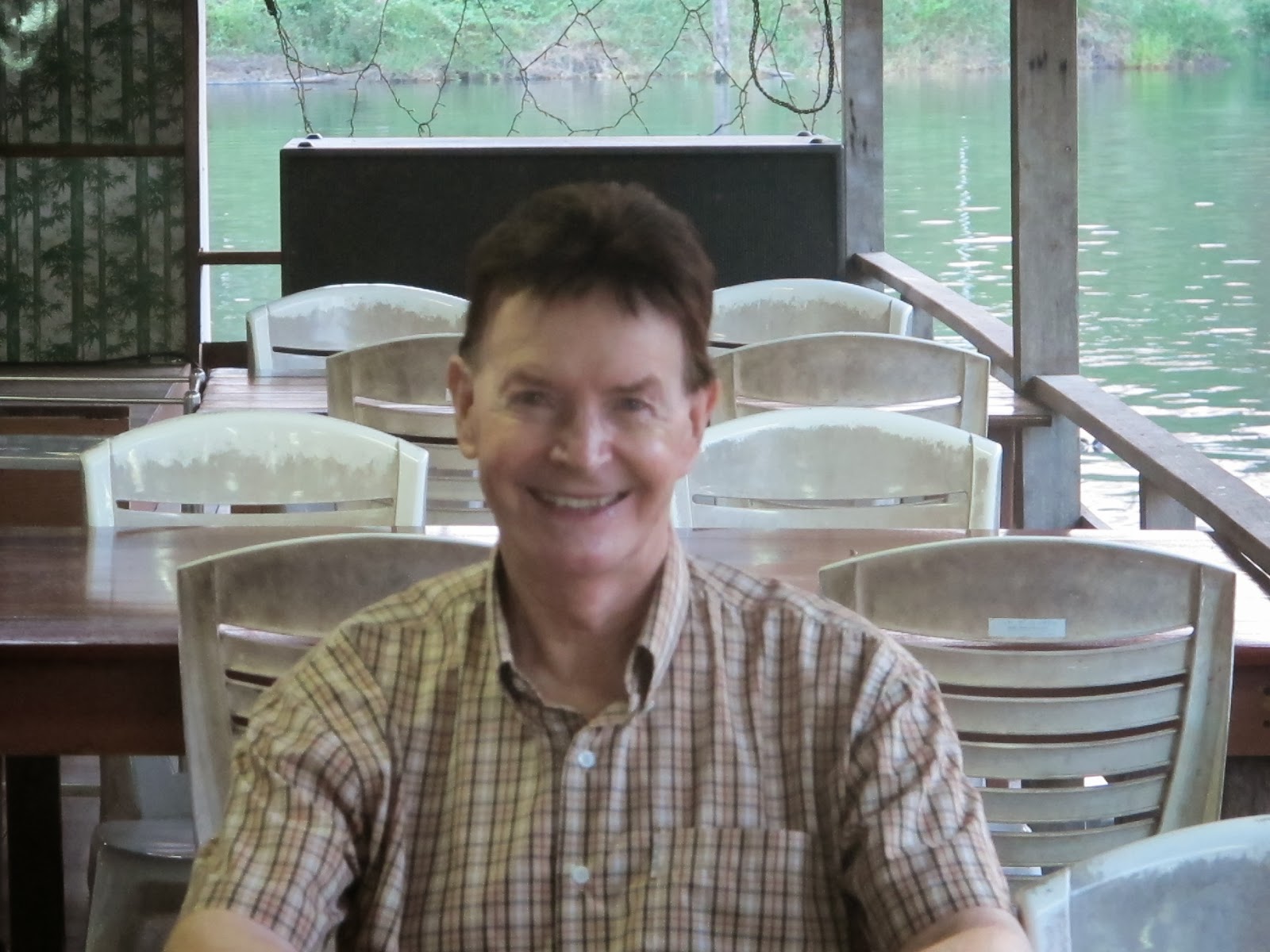 Today I'm delighted to welcome author Mike Sullivan to my blog, bringing an excerpt from his recent release, Ransom Drop. The first novel in this Sam Seabury series, Dead Girl Beach, is already available on Amazon, and the third novel, Eden2, will be coming soon. Meanwhile Mike is already working on another novel, The Anonymous Hacker! Mike blogs at THE BANGKOK BLOG, and if you've ever suffered from procrastination, I'm sure you'll enjoy what this busy author has to say to us. (Don't forget to scroll down for the excerpt too!)

HOW TO STOP PROCRASTINATING AND DO SOMETHING!


A recent comment came into my website. The person was looking for a way to stop procrastinating.

I don't have all the answers. In fact, at times, I have very few. But I'm inclined to  believe that if a person is having trouble getting started, it's because fear has crept into the picture. That fear rests in a fear of being successful. "Wow, what if people actually like what I'm doing? Then if I'm successful, I'm going to have to change and deal with my success." There's  a fear of doing this, working at the back of your mind. There is also the fear of being rejected and feeling foolish. It's like the feeling that you're at a dead end in a dark, secluded alley and someone is tramping down after you. It's that kind of intense, sharp, mind-numbing  fear that's stopping you in your tracks. So naturally you're going to sit around, looking vague and distant, and not do anything. "Oh, I'm just a little lazy." That's a cop-out for your lack of mobility. It's not going to help.

So, do you have a solution for us, Mike?

Solution: The best way I know of to deal with fear is to stare it down. Meet it head on. Admit that you are scared, but that this time you are going to take control. You're not going to be scared and allow the fear to overwhelm you like it has for the last ten times that you promised yourself you weren't going to yield to the fear. Soon you will find that you can brush the fear aside and not think about it anymore because you are turning over a new leaf in your life and making a fresh start. You're not going to sit around any more. You're going to get off the Internet.  You're going to put off chatting with your friends for a while. You're going to turn off the TV and you're going to get started completing your next project.

How does fear, or procrastination, affect you as a writer?

As a fiction writer, I stare into a blank page every day. I'm scared. I don't know where the next sentence is coming from. I've done my outline. I think I know where the book is going. But getting the first sentence down on paper is often difficult. And there is the urge to stop, think about walking the dog, or watering the flowers, or taking a trip down to the market. But I know if I start doing any of these things, I'll go into a tailspin and start procrastinating. Then I know what the result will be. Nada, zero, nothing. The book will never get written. THE THINGS THAT ARE IMPORTANT TO YOU NEED TO GET DONE.  That's the message. The message is simple and direct. And direct, simple messages are those that speak the truth.

Thank you, Mike. So now I'll stop procrastinating with the writing and editing. But the housework? Now that's another matter...

Could you tell us something about your new novel, please?

About the novel Ransom Drop.

When a notorious kidnapper hijacks tour buses near a heritage site in central Laos, merchant seaman Sam Seabury warns Victoria Hong, daughter of billionaire pharmaceutical tycoon Robert Hong, not to holiday there. Young, rebellious, Victoria won’t listen. She travels to Laos, and ends up kidnapped, and held for ransom.


When Seabury agrees to deliver the million dollar ransom to a remote, wind-swept region on the Plain of Jars, his troubles are just beginning. Along the way he uncovers a tragic wartime secret from America’s Secret War in Laos, four decades old. Will he live long enough to bring the secret to the light of day? Will he bring Victoria back home alive? Only time will tell –and Seabury is running out of time.

And how can readers find out more about you and your novels?


Seabury is at the airport in Vientiane, Laos. He has just flown in from Bangkok and is having a difficult time with a military policeman.

Seabury knew the customs people were tipped off early. Robert Hong had greased their palms with plenty of money. It traveled via the Thai/Laotian underground and entered the country illegally, without incident. Seabury guessed that the MP wasn’t informed of the situation and hadn’t received his share of the money. Two hundred American dollars would allow Seabury to leave the room, unhindered.

“One hundred,” Seabury said.  “That’s all I can spare.”
“Two hundred,” the military policeman said. His lean, brown face crinkled. A web of wrinkles cut deep into the skin at the corners of his eyes.

Seabury got out his cell and dialed a number.

“What? What you do?” The MP shot up from behind the desk.

He grabbed at the phone. Seabury pulled it back. The MP lost his balance. He lunged over the top of the desk. Angry, he straightened up his scarecrow body. He sneered at Seabury, his eyes hot as fire. His thin mouth cracked open. It exposed a row of crooked teeth, one gold, one chipped and cracked.

The guy’s eyes grew wide, astonished.  Gradually, the anger drained from his face.

“One hundred dollars,” Seabury said opening his wallet. “Here, take it.” He put the money down on the top of the desk.

“I call MP big boss,” he said. “You get nothing. Take one hundred dollars, you come out ahead. Up to you, what you do now.”

The guy reacted like he didn’t hear what Seabury had said.

Slowly, Seabury dialed the number, bluffing. He hadn’t anything, no numbers, no MP big boss; no customs official to call. If the guy had pushed it a little, he would have realized that Seabury was playing a high-stakes poker game with a hand full of deuces, instead of aces high.

The time was right for seizing the advantage.

Five seconds flew by, then three, then none.

Time over. The advantage gone.

“There is none. Only departure tax. Nice try.”

Seabury took the cell and punched in a few numbers, turned to the side, brought the phone close to his ear.
“OK. OK,” the guy said finally, pulling the hundred dollar note into the front pocket of his dark green military uniform.

Outside Seabury tossed his bags into the back seat of the taxi and climbed in.

…from the novel RANSOM DROP

Mike has a Master’s Degree in Education/Psychology from Western Montana University, USA. He enjoys writing exotic suspense thrillers set in foreign lands. His action hero, Hawaiian merchant seaman Sam Seabury, a tough but lovable character, is constantly pitted against crooked cops, corrupt politicians, and  dark, unsavory characters operating in the dark underbelly of society. Unlike other action heroes operating in one country, Seabury travels the world helping innocent victims, often putting his own life at risk. Most of his novels are set on the warm, sunny beaches of Southeast Asia, or in exotic third world countries. Sam Seabury is a bright, new face on the international thriller market.

A resident of Bangkok, Mike lives with his wife and daughter and devotes himself to a career as a full-time writer. He continues to work on a series of dark, compelling Sam Seabury international thrillers. Presently, he has signed a contract with his publisher Eternal Press/Damnation Books for a third novel in the Sam Seabury series. Like all writers dedicated to his craft, he is working on a fourth novel in the series titled THE ANONYMOUS HACKER set in Brussels Belgium.

Sheila Deeth said…
I hadn't looked at procrastination that way before. Thank you for this post Mike. And thank you for visiting my blog.
December 3, 2013 at 1:01 PM

Juanita said…
I'm a Seabury fan already! If you haven't read Dead Girl Beach yet, waht are you waiting for? This hero is destined for action!
December 4, 2013 at 5:18 AM