In this battleground of angels, Evil won. 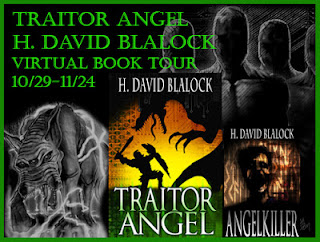 Have you ever wondered why bad things happen to good people? Or why the world seems to go from bad to worse? H. David Blalock offers an interesting and exciting answer in his Angelkiller Triad--a series of three books set in a world where earth is the battleground and Evil won. I reviewed the first book, Angelkiller, last week at http://books.gather.com/viewArticle.action?articleId=281474981757119, but now I've finished reading Traitor Angel too, and I'm eagerly awaiting book three.

Following on immediately from Angelkiller, Traitor Angel ups the momentum, adds intense action and intriguing backstory, and creates a satisfying sense of character, depth and danger, even for readers who didn't start with book one. The slightly futuristic world introduced in Angelkiller hurtles now toward Evil domination, forcing the good guys, the Army, to face increasingly tortuous choices in its defense. Jonah Mason has already broken the rules and isn't sure what to make of the forgiveness he's offered. Meanwhile his colleagues reveal new depths and dangers, and the mysterious Knights prove not quite as helpful as their promise. The difference between good and evil, perhaps, is that good really cares about people. But  evil does an excellent job of pretending to care, while the good of the greater number might even seem uncaring to the one who pays.

After reading Angelkiller I really appreciated learning more about the Conflict's place in history. Meanwhile virtual reality's intriguing backdrops, with convincing technology and imagination, keep a sense of future danger firmly in the foreground. The action's fast and furious, in real and virtual worlds, while the musings on modern life are filled with contemporary thought-provoking details. And the touch of angels and demons is both scary and enthralling.

The fate of one and the fate of the world entwine in the pages of this book, and the cruelty of angels just might be the mercy of God. Traitor Angel tells a complete story, satisfyingly built on that sense of awe glimpsed behind the veil at the end of Angelkiller. And now I'm eagerly waiting to learn how it all plays out in book three

Disclosure: Since I'm posting this as part of the author's blog tour, here's my official disclosure statement:

Disclosure of Material Connection: I received this book for review from Seventh Star Press author as part of a virtual book tour. I was not compensated nor was I required to write a positive review. The opinions I have expressed are my own. I am disclosing this in accordance with the Federal Trade Commission’s 16 CFR, Part 255: “Guides Concerning the Use of Endorsements and Testimonials in Advertising.”

And now for some info about the author, book, and other tour stops

In Traitor Angel, the second book of the Angelkiller Triad,  the war between The Army of Light and The Enemy continues behind the scenes. Unknown to the general population, the battle for control of humanity is heating up.

Jonah Mason, called Angelkiller, faces more than one decision. His Army resistance cell is wounded physically and emotionally, on the brink of falling apart. The mysterious allies calling themselves Knights are pressuring him to abandon his people. Meanwhile, the world outside draws closer to Armageddon.

As Mason and his friends pursue their campaign against Dorian Azrael's global megacorporation, Andlat Enterprises, the stakes get higher with each desperate foray into the enemy's computers. They are fated to lose one of their number and gain an unlikely ally, but any advantage they gain could be fleeting at best.

If they fail, it could mean the end of The Army and all resistance to the forces of Darkness. 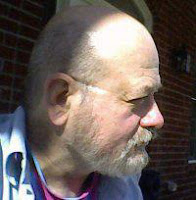 H. David Blalock has been writing speculative fiction for nearly 40 years. His work has appeared in print and online in over three dozen publications, spanning every format from short stories to novels, non-fiction articles to screenplays. He is also editor of _parABnormal Digest_ for Sam's Dot Publishing. To find out more visit his website at www.thrankeep.com.

Donna Fletcher Crow said…
Oh, dear. I really dislike books where evil wins--that's how I felt about The Shining. Since this is a trilogy, however, I assume it isn't really overyet.
November 20, 2012 at 8:46 AM

Unknown said…
This looks right up my alley, but it seems it would be best to start with the first book. My Kindle's stacked, but I've put the trilogy on my reading list for early next year. Thanks for this review, Sheila.
November 20, 2012 at 6:52 PM