Are you ready to change destiny?

May 21, 2020
There's this thing about changing destiny, and butterfly wings, and the laws of unintended consequences. And oh, it could get so serious... so instead I'm just posting a picture to advertise a novel, so we can imagine changed destinies instead. After, that's part of why we read and write.
“The odds of being struck by lightning are practically the same as finding the love of your life.” ~Josiah
Josiah doesn’t believe in ghosts. But he can’t deny this abandoned house with its dark history holds more than just shadows of the past. Whether he’s dealing with something other-worldly or the effects of a near devastating head injury, there’s no doubt he’s being haunted.Brenna’s life has been rough enough lately. Homeless and alone, she’s found safety in an old house atop Unger Hill. But she isn’t alone. She’d heard the rumors of the haunting here, but the handsome stranger invading her sanctuary is all too real, and might be more dangerous than any spirit. 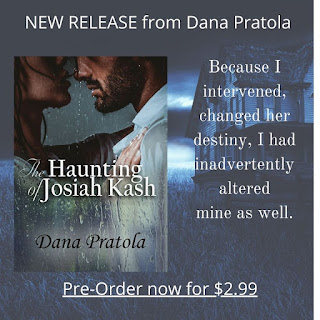 So let's be wary of wishing we could change the isolation, the lock-down, the rules (ah, but what about the rules of virus transmission) and everything else. Who knows if the changes we make will benefit anyone, or if the benefits we seek won't be outweighed by the consequences.
The Haunting of Josiah Kash is available for preorder at https://www.amazon.com/gp/product/B088Q63RVL/
spotlight