An Aversion to Sequels 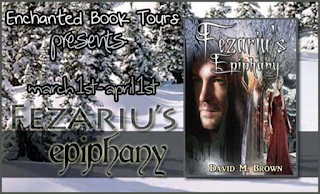 47,500 words and counting, that's how far I've got with writing and editing the sequel to Divide by Zero. My main character's finally told me how the story ends, so now I've just got to set all the pieces in place and avoid that insidious urge to race too fast to the finish line.

When the author of Fezariu's Epiphany told me the title to his guest post today it sounded just perfect. He doesn't like sequels and I'm writing one. I'm also reading, of course, and have just finished reading his unsequeled novel, Fezariu's Epiphany. He's created a huge and fascinating world, filled with social and geographic history, great characters, curious nations and much much more. But perhaps I should let him tell you about it.

Click here for my review of Fezariu's Epiphany, and read on to learn of author David M. Brown's aversion to sequels. Thank you David for visiting my blog.

An Aversion to Sequels
When I published Fezariu’s Epiphany back in May 2011, I sometimes found interview questions wanted to explore the possibility of a sequel. I can say for certain that you will never find me writing a follow-up about another epiphany Fezariu has. The Elencheran Chronicles are intended as a series of self-contained novels, a visit for the reader to a different period of history, and a brief amount of time spent in the company of some of the characters. The timeline currently stretches to 47,000 years and may go further when I revisit the world history at some point, so readers are not short of literary destinations for their summer holidays.
So, am I saying that sequels are completely taboo? My next novel, A World Apart, will not have a follow-up. It’s a long novel but by the end there have been enough resolutions to say the story is well and truly over, there isn’t a need for any more from the three main characters – Demetrius, Eleyna and Halcyon. That said the idea of writing a series of novels about the same characters is not one I can readily dismiss, the history of Elenchera simply won’t allow it!

Looking through the history I find I have many ideas waiting to be written and it becomes more difficult trying to decide which one will be the third book in the Elencheran Chronicles. Some events in the history are so action-packed and stretch across a vast range of years that one novel may not be enough to contain them all. I think inevitably sequels will be necessary, perhaps a trilogy, but no more than that, I simply can’t commit to that many books.

When I first started writing about the world of Elenchera I knew that I wouldn’t and couldn’t write a series like Robert Jordan’s The Wheel of Time or Terry Goodkind’s The Sword of Truth. I never got into Jordan’s work despite completing the first Wheel of Time book but I read every one of Richard and Kahlan’s adventures in The Sword of Truth series. Goodkind did very well to sustain those characters through one long and continuous narrative but I did find the later instalments inferior to the earlier books. I didn’t want to go down that same path. I love my characters but the thought of spending half a dozen books with them is not an appealing one. I would strangle them before their stories were finished!

This is one of the reasons I am drawn towards Terry Pratchett’s Discworld series. They’re always in the same world but they are self-contained novels and feature a wide range of characters, always plenty of variety. Although regulars like Rincewind, Death and the Guards of Ankh Morpork would request that you read their books in order I don’t always think it’s essential. Elenchera will be just the same. If you saw a pile of books about Elenchera you could pick any of them up and not be missing anything.

When I come to write those longer novels I will have to commit to a maximum of three books to tell the story but no more than that. I’d rather have just one novel to tell a story but some are such long narratives I fear they could stretch to 2,000 pages which is an epic book for any reader, it would even put War and Peace to shame. I’ve seen many people roll their eyes at the mention of Tolstoy. I don’t want that to happen to me!

My aversion to sequels means that some much-loved characters may only get a brief time in the spotlight but although that saddens me to a degree I think it’s also a mark of great characters if readers can get attached to them after knowing them for only a short time. The more I focus on self-contained novels, the more of Elenchera I can show you. There is a lot that goes on in those 47,000 years, certainly more than I can tell you in a lifetime but I will endeavour to whisper as many secrets as I can. Just remember that if a novel of mine does not end on a cliff hanger then the chances are you won’t be getting a follow-up.

Thank you for visiting today David, and, having read the book, I can certainly agree that Elenchera is an amazingly detailed world worthy of many more novels, and Fezariu's Epiphany is a wonderful introduction to its peoples, history and places.

12-year-old Fezariu thought his mother died when he was little, but when his beloved stepfather dies the boy discovers she is alive and well - and working at the most famous brothel in all of Elenchera. When she cruelly rejects him it's more than he can bear, and he runs away to join a band of ruthless soldiers for hire. The Merelax Mercenaries will fight for anyone who can pay them, no matter the justice of the cause.

Fezariu grows up among the soldiers and becomes one of them. He thinks his time with the mercenaries has hardened him. But a campaign in his old home town pushes him too far, and he discovers what really happened to his mother. Maybe there are some things money shouldn't buy... and maybe it's time Fezariu took his revenge.
Author Bio
David Brown could be considered a fantasy fanatic, especially since he has spent the last 10 years developing a 47,000-year history for his fictional world of Elenchera. When converting his obsession into literary form, David commits himself to a rigorous writing and editing process before his work can meet his approval. Combined with the critical eye of his wife and a BA Honors in History and English, David's dedication leads him to his goal of inspiring readers through heartfelt stories and characters.
Although David is inspired primarily by fantasy fiction, he also finds his muse in the form of anime, world cinema, history, and biographies. His own books, Fezariu's Epiphany and the in-progress A World Apart, combine aspects from worlds both old and new into compelling tales of a world not soon forgotten., David himself certainly does not lack a spirit of adventure; in fact, he left his job in 2007 in order to spend a month traveling. Second only to meeting and marrying his wife, David counts this as one of the most amazing experiences of his life.

David M. Brown said…
Thanks for letting me guest Sheila. I hope your readers enjoyed the post. If you ever want to guest on The World According to Dave you'll always be more than welcome. Thank you :)
April 1, 2012 at 9:53 AM