Where will you be this summer? 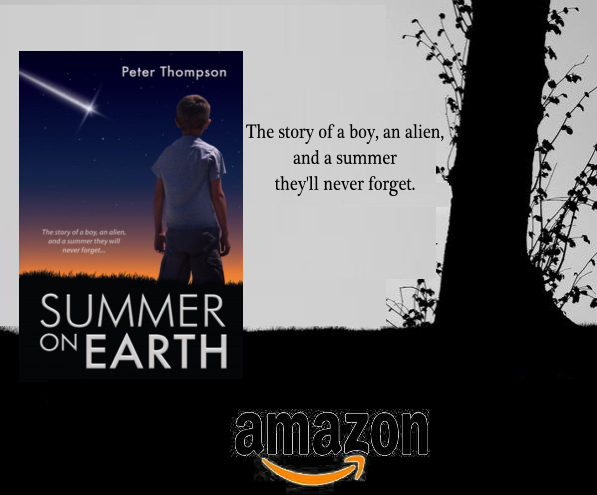 This summer I'm unpacking my garage back into my basement, having finally recovered from winter's flood. Sometimes I feel like a multi-armed alien, carrying books and boxes and longing for extra arms and legs. But mostly I just feel lucky that I'm able to move back before the heat upstairs drives me crazy. So... where will you be this summer? And will you meet any aliens?

I'm delighted to welcome author Peter Thompson to my blog today. His new novel, Summer on Earth, is advertised with the very cool tagline - The story of a boy, an alien, and a summer they'll never forget. Can you resist it?

Peter has kindly offered to let us in his secrets of how to beat writers' block. Readers of Summer on Earth will be very glad that he's not blocked.

So, welcome to my blog Peter, and over to you...


How to beat writer’s block
by Peter Thompson

Have you ever had writer’s block? If you are a writer, this is an all too common problem. I had a case of writer’s block that lasted for years. Or, let me rephrase that. I didn’t write for years, and I blamed it on writer’s block. At the time, I wanted to write, but I had a lot going on and it wasn’t a priority. Still, I would regularly sit down at my computer and start to write. But, if I didn’t know exactly what I wanted to write about, I would sit at the keyboard and stare at a blank screen. Then, I would check my email again, play a game of solitaire or three, check my favorite blogs, the sports scores, the latest stock prices and maybe find a recipe for dinner that night. And then after a couple of hours of unproductive time, I’d close my computer and curse my writer’s block.

I don’t do that anymore. I am writing more and better now than ever before. And I have plans in place for projects to start when I’m done with the one I’m working on now. Everyone is different, and what worked for me may not work for you, but here are some things that helped me get my creative muscles working again.

·        Make it a priority – We do what is important to us, even if we don’t want to. There are days where you probably don’t want to go to work, but the paycheck is important. Like it or not, you get up and go each day. If there’s something happening in your life, you might need to push your writing back until you can make it a priority. When I decided it was truly a priority, I made a commitment to put in the time effort.
·        Put in the time – I write at the same time each morning. I have my rituals that I do first to get into the right mind space, but when it is time to start, I put my fingers to the keys and start writing. A lot of times I don’t know what I’m going to write about. I make notes and plan some, but I don’t do a detailed plot ahead of time. But it seems that without fail, if I start writing, something will come. It might not come right away and it might not come in the way I expect it, but if you do the work, the universe will take care of you. Make it a habit and keep writing.
·        Avoid distractions – For me, the distractions were an excuse. There is always something that you could be doing instead of writing. I let my family now that I wasn’t available during writing time, and I turned off my phone. And maybe the biggest thing, I only used the computer to write. No games, email or anything else. Being focused on the writing made a big difference for me.
·        Don’t wait for an idea to appear – This used to be a big problem for me, and I would wait for inspiration to strike before starting to write. Now, if I don’t have an idea on what I want to write, I will pick some random words, combine them and try to write a story from there. I also keep idea notebooks. These are just random thoughts and ideas that I’ve written down over the years. The idea for my new novel, Summer on Earth, came from a paragraph I wrote in a notebook and promptly forgot about. Years later I was looking through the notebook, saw the idea, and it connected.
·        Take the pressure off – When I write, I try and treat it as play. I am not trying to write perfectly, I am just putting in the time. If I don’t pressure myself, I find it easier to get into a flow.

These are just a few ideas, and there are plenty of other things that can help. But these changes made a difference for me, and helped me to reclaim my creativity.

Thank you Peter. As you might imagine, unpacking boxes is distracting me at present, but ideas pour over me with every rediscovered treasure, so hopefully, when the pressure's off, I'll have plenty to write about.

And now for some more information about the book and the author...

The night that eleven-year-old Grady Johnson looked out his window and wished upon a shooting star, his life changed forever.

Grady, his Ma, and younger sister Luanne are having a hard summer. Dad has died and the family isn’t the same. Though Ma is trying her best, Grady knows they don’t have enough money to get by.

The shooting star he saw was a space craft plunging to Earth, and landing at the back of their farm. Extraterrestrial engineer Ralwil Turth has one goal, to fix his power drive and go back home. But things don’t go as planned. Stuck in human form, he gets to know Grady and his family as he works on their farm. He starts to learn about what it means to be human, and the exotic charms of this planet like the taste of potatoes, and how amazing bugs are.

Ralwil grows to care for Grady and his family. On a trip to town, he realizes that money is what matters to humans, and is the cause of the family’s trouble. That night, he uses his technology to combine a twenty-dollar bill with an oak twig. Over the next week this grows to a towering tree, every leaf a twenty-dollar bill. This, Ralwil is sure, will solve all the family’s problems.

But the family’s wealth raises suspicion in this small town, and this soon leads to more trouble. With the family’s fate, and Ralwil’s life, on the line, Grady has to find the courage to help his family and save his friend.

Summer on Earth blends humor, adventure and poignancy to create an unforgettable story about finding home.

WHERE TO FIND IT:

Before
It was hotter than usual that night, and Grady couldn’t get comfortable, even with the fan on high. The June bugs thumped against the window screen, and the crickets chirped so loudly it sounded like they were right there in the room. He could hear the TV on downstairs, so he knew Ma was still awake. Ever since Dad died she’d stayed up late most every night.
Grady just stared out the window and looked at the night sky. Where they lived, out in the country, there wasn’t much light at night and the stars stood out more than they did in the city. Grady tried to find the constellations his Dad had taught him, just letting his mind wander. At some point he started to get sleepy. But before he fell asleep, he saw a shooting star. And when he saw it, he made a wish.
This is the story of how that wish came true.

Peter Thompson grew up in Illinois, and lives near Chicago. He remembers how excited he was when the first astronaut stepped on to the moon. He has had an appreciation of space, and all its possibilities ever since. His love of children’s books developed while reading to his three sons. His first novel, Living Proof, was a thriller published by Berkeley Books. Summer on Earth is his first book for younger readers. It will be released in August of this year.

WHERE TO FIND HIM: