Literary science fiction and historical romance, in Autumn, in Carthage 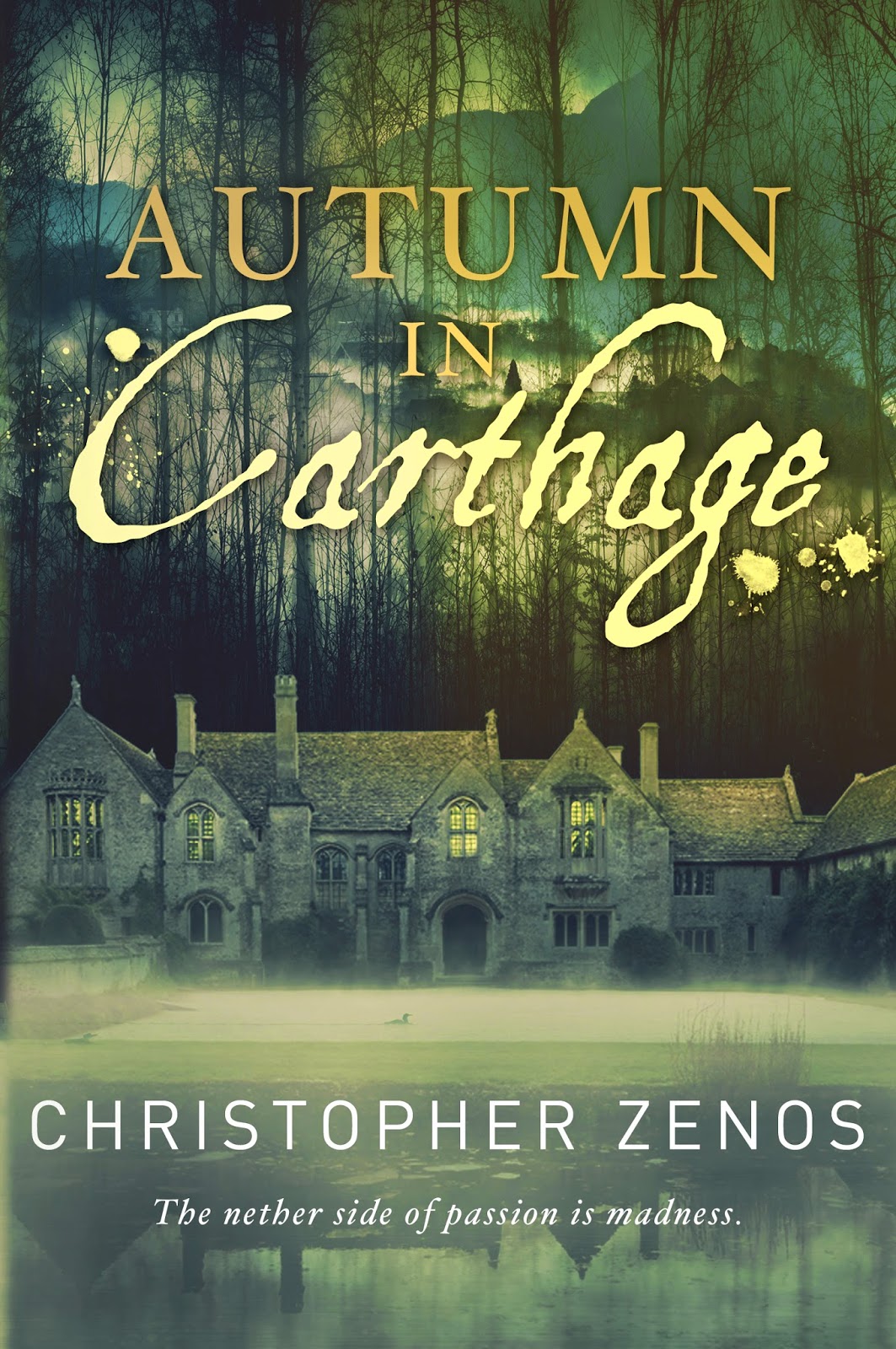 Today I'm delighted to welcome author Christopher Zenos to my blog. His novel, Autumn in Carthage, blends serious literary fiction with science fiction and historical romance. Add a tagline - "The nether side of passion is madness" - and you'll know why I'm thoroughly intrigued. But, in a world of well-defined genres, round stories and square boxes, how does an author "decide" to write such a blend, and what kind of research goes into making it "real?" Over to you Christopher, and thank you for visiting my blog.


Autumn in Carthage emerged from two sets of interests. First, since I’m a hopeless romantic, it is very much a love story. Well, more than one, in point of fact. Both the male and female protagonists are people with enormous burdens, broken by life. The entire plot revolves around their journey to each other, and the sanctuary they have the potential to build together.

Second, this book was written at the intersection of “hard” SciFi and historical romance. So…what does that mean? Well, it takes both an analytic and a descriptive approach to humanity’s trajectory. The descriptive part came easily. I’ve always been a history buff—playing truant from work to sink into online material on the emergence of social structure in Neolithic Göbekli Tepe, the Late Bronze Age Collapse due to the arrival of the Sea Peoples, or the exploits of the Hapsburg tercios. Much of the action, then, occurs against the backdrop of Colonial America and King William’s War, itself part of the worldwide struggle against the Sun King. The conflict strongly influenced the emergence of the colonies that were to become America, as well as that of French Canada. On a larger scale, it was a time of cataclysmic change, when the old religious and civic orders were giving way to a more “rational” one, and unprecedented links were being forged between Europe and the civilizations of Asia and Africa. The Salem Witch Trials—the microcosm within which the historical action occurs—unfolded within that macrocosm, a fact that is often overlooked.

But while these descriptive parts coalesce into subplots, the analytic theme pervades the narrative. Simply put, the book is a vehicle to explore the social nature of time. And this is where “hard” SciFi comes in—specifically, the classic works of Isaac Asimov and Frank Herbert. I remember the first time I read Dune—the original, the classic, not the shallower works that followed. There’s this crucial scene early in the novel where young Paul Atreides, the future Mentat Emperor, lost in the unforgiving deserts of Arrakis, first glimpses time itself—the probabilistic course of human events—and understands his role in its evolution. The conception of history as a structured-but-stochastic process that could be predicted and shaped fascinated me. And, of course, like every other nerdy kid on the planet, I’d read and reread Asimov’s Foundation series. This book is partly about fleshing out the vision of time nascent in his notion of “psychohistory,” or the mathematics of human social process.

In the years since Herbert and Asimov wrote, we social scientists have learnt much about how history flows and is structured by human institutions, how temporal nodes emerge and are utilized by informed actors, and what an authentic mathematics of social evolution could look like. Hence the intertwining in this novel of historical events—thirteenth century eastern Europe, Germany during the Holocaust, seventeenth century Salem—with chaos theory and computational social science.

To summarize, then, the book falls squarely within the boundaries of genre fiction—but of the more cerebral kind. At the same time, it is rawly human, plumbing the murky depths of human experience to layer emotional flesh over the cognitive bones. It is about flawed individuals making difficult choices under immense pressures—and the outcomes, both beautiful and terrible, of those decisions. Above all, it narrates one man’s physical and spiritual journey through a difficult lifescape toward serenity. It is that human dimension, ultimately, that I hope readers will respond to.


Thank you Christopher, and now I'm even more intrigued. I remember reading that scene from Dune and being thoroughly hooked--such a powerful and beautifully rendered idea. The Foundation series fascinated me too, but never quite convinced me the way Atreides' visions did.

Nathan Price is a college professor with crippling impairments, seeking escape from his prison of necessity. One day, in a package of seventeenth-century documents from Salem Village, he stumbles across a letter by his best friend, Jamie, who had disappeared six months before. The document is dated 1692‹the height of the Witch Trials. The only potential lead: a single mention of Carthage, a tiny town in the Wisconsin northern highland.

The mystery catapults Nathan from Chicago to the Wisconsin wilderness. There, he meets Alanna, heir to an astonishing Mittel-European legacy of power and sacrifice. In her, and in the gentle townsfolk of Carthage, Nathan finds the refuge for which he has long yearned. But Simon, the town elder, is driven by demons of his own, and may well be entangled in Jamie¹s disappearance and that of several Carthaginians. As darkness stretches toward Alanna, Nathan may have no choice but to risk it allŠ

Moving from the grimness of Chicago¹s South Side to the Wisconsin hinterlands to seventeenth-century Salem, this is a story of love, of sacrifice, of terrible passions‹and of two wounded souls quietly reaching for the deep peace of sanctuary.

Christopher Zenos is a pseudonym. The author is a well-published university professor who has contended with mental illness all his life, and knows the beastie well. Hence the mask: As this novel’s protagonist puts it, successful Passing is now a survival imperative for crazies like him. Autumn in Carthage developed, in large part, from his need to sing of this world he inhabits: The realm of the stranger, the odd one. The man standing at the window, bracing against the wind as he gazes in wonder at the light and comfort on the other side.