Forget me not blues 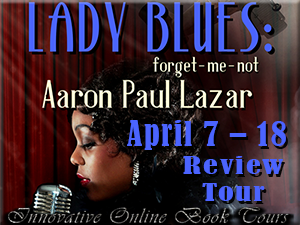 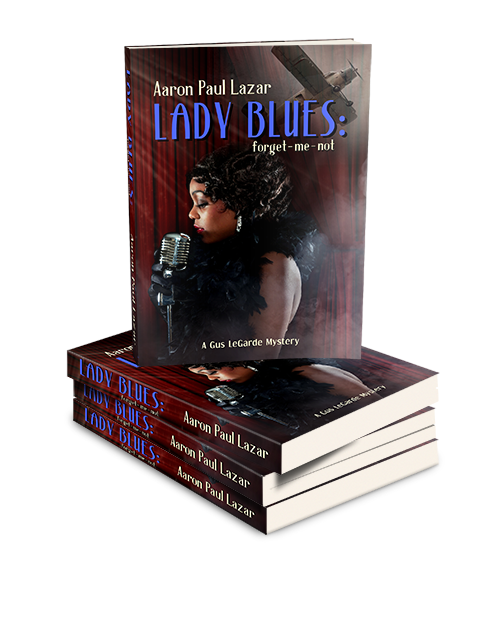 I'm delighted to host author Aaron Paul Lazar's latest book, Lady Blues, as it tours with Innovative Online Book Tours today. Forget me not, says the subtitle, and forget me not say the wonderful characters too.

I've enjoyed reading lots of books from Mr. Lazar's novel series, not least because he writes from the point of view of very real characters, frequently ones who've already experienced enough of life to have something worthwhile to say. Gus LeGarde, the protagonist of Lady Blues, is no exception--husband, father, grandfather, musician, professor... all-around good guy, and not too bad at solving the odd mystery and escaping threats of death in his spare time. So please read on for a book blurb, review, author bio, and even a first-chapter excerpt! Enjoy.

I’m already hooked on author Aaron Paul Lazar’s Gus LeGarde mysteries, and Lady Blues is another great addition to the series. As always, music plays a key role in the story, and plays it most evocatively. An elderly Alzheimer’s patient, on meeting Gus LeGarde, exhibits that quirk of memory whereby past music is more real than present pain. But octogenarian Kip's present pain is soon to be alleviated by a new drug. Gus is privy to the old man's delightful awakening, with memories of World War II, and Bella, and the Blues. Soon he's wondering, could this man’s past even hold the key to answering a long-debated musical mystery?

The Genesee valley is beautifully described in this novel, with evocative scenery, and an honest sense of friction between Gus’s feelings for his well-tended garden, and the stark failed landscaping of cheap business practices. But business practice will affect more than the landscape in this tale. Small-town disaster leaves a quiet woman homeless. Small-business troubles leave an old man sliding back into forgetfulness. And small tendrils of concern grow into serious investigation and serious danger as Gus takes charge.

I love the characters of these stories, drawn with enough depth that they can change and grow from novel to novel while still feeling like well-remembered friends. But there’s no need to read the earlier novels before enjoying this one. Start wherever you choose, wander in the valley’s sunshine and scenery, rest in its small-town homeliness, meet Gus, make friends with Sig and co, and watch love grow while solving exciting mysteries.

Disclosure: I was delighted to read a copy of this novel before its release, and again afterward.

BLURB:
Past and present collide when an Alzheimer’s patient’s fragile memory holds the key to solving mysteries dating back to World War II—including a long lost secret love affair.

Music professor Gus LeGarde is just doing a favor for a friend when he agrees to play piano for church services at a local nursing home. He doesn’t expect to be drawn into a new friendship with an elderly Alzheimer’s patient dubbed “the music man” or to stumble across a decades-old mystery locked inside the man’s mind.

Octogenarian Kip Sterling doesn’t know his own name—but he speaks Gus’s language, spouting jazz terms like “cadence” and “interlude” and “riff.” He’s also obsessed with “his Bella,” but nobody knows who she is.

When Kip is given a new drug called Memorphyl, he starts to remember bits and pieces of his life. Gus learns Bella was Kip’s first and only love, but their relationship was shrouded in scandal. Intrigued, Gus agrees to help search for her. Could she still be alive?

Horrified when the miracle drug suddenly stops working and patients begin to backslide, Gus panics. Can he help Kip find his beloved Bella before his newfound memories disappear? 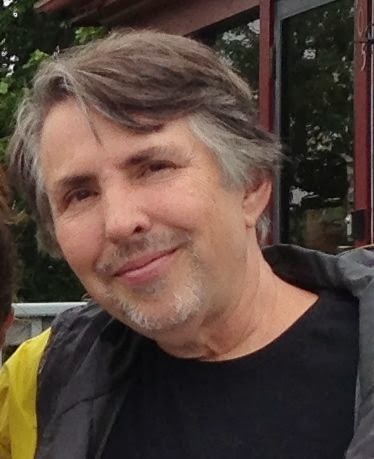 I strolled along Main Street with Siegfried, my best friend and brother-in-law, unable to shake the song repeating in my head. I’d played it for my Opera 101 class yesterday at school, and since then, kept hearing Marcelo Alvarez singing “Che gelida manina,” from La Boheme. Because Camille and I had seen him perform in this role last fall in New York City, it made me long for Lincoln Center, or at least a really good hot pastrami sandwich from a decent deli.
Why I thought of food at that particular moment was a mystery, because we’d just finished a big breakfast of scrambled eggs, home fries, and bacon at Clara’s Diner. I shrugged and let the warm spring air caress my face and bare arms. The sun felt good after the lingering cold of March. I reveled in the feeling of freedom, happy to have no appointments or chores looming in the near future, and looking forward to a leisurely stop in the village bookstore.
A warm breeze teased across the Genesee Valley, filling me with a curious sense of exhilaration. Just past the bagel shop, from the top of the ridge where our historic village of Conaroga, New York perched, I stopped for a minute to enjoy the view. Rolling hills swelled in the distance, coated green with winter wheat.
I wanted to stay put and soak it all in, but Siegfried was rapidly disappearing into the crowded street. With his blond ponytail swaying behind him, his long legs ate up the ground.


I smelled it before I saw it, then looked up.
Smoke.
It poured from the upper floor where Thom Kim lived with his sister, Lily. Although the street teemed with people, no one seemed to have noticed the smoke. We careened along the sidewalk, pushing through shoppers and students.
Cursing because I left my cell phone in the car, I grabbed the nearest student texting on his phone. He stared at me through black dreadlocks as if I were attacking him. Which I guess I was, in a way.
I pointed up. “Call 911. Tell them there’s a fire.”
The crowd parted, staring and pointing at the smoky building. The boy with the phone gawked at me, as if locked in a trance.
I shook his arm. “Call 911!”
In that instant, he came to life, stabbing at his phone. “Okay. I’m on it.”
Siegfried and I rushed into the building. No one stood behind the sales counter or in the work area in the back of the shop.
“Where are they?” I said, hurriedly searching behind doors and cabinets.
“Upstairs,” Siegfried said with certainty, pointing toward a back staircase.
We scrambled toward the stairs, entering a cloud of thick, choking smoke.
A woman’s cry came from above.
“Lily!” Siegfried shouted, covering his mouth and nose with his shirt. He scaled the steps two at a time with me right behind him.
A hoarse bellow came from the left in what had to be Korean, Thom’s native language. Out of the corner of my eye, I saw a flash of movement, followed by a burning rafter crashing to the floor, but smoke quickly obscured my view.
A flicker of orange flames bloomed in another doorway, flaring to the ceiling. The fire was spreading fast.
“Professor,” Siegfried yelled over the roar of the inferno, peering into the darkness. “I can’t see!”
On the far side of the building, a window cracked and exploded, allowing the smoke to shift and clear just enough to give us a view of the bedroom, where I now headed to search for Thom Kim.
“There!” I said, pointing to the man pinned beneath a fallen timber.
Fire crackled along the wall and licked orange-red near his arm. The bed, fully engulfed, leapt with flames.
A scream erupted farther down the hall.
Lily.
“Get her!” I shouted over my shoulder, stumbling toward Thom.
Siegfried quickly ducked into the smoke, following the direction of her cries.
The wall of heat blasted me, nearly melting my resolve. Stooping low, I took a deep breath and crawled toward Thom. I pulled hard on his arm, but couldn’t budge him. He uttered a low moan. The fire had reached him and his sleeve was starting to burn.
Grabbing his jacket from a nearby chair, I slapped it over his arms, extinguishing the flames, then kicked repeatedly at the scorched beam until it finally moved. Breathless, I half-dragged, half-carried Thom out to the hall, stumbling backwards away from the fire and denser smoke. With a concerted effort, I slung him over my shoulder.
A blast came from the rear of the building.
Oh my God. Siegfried. Lily.


So, how can I leave you there? Buy the book and find out more, or else visit these other Innovative Online Book Tour Stops on the tour... and enjoy.

Aaron Paul Lazar said…
Sheila, thank you so much for having me here today. It's an honor, and I always, always love your reviews, they are thoughtful and intriguing. I just sent out another LeGarde book to Beta readers. If you get a hankering, I'm always thrilled to share with you, too. But I know how hard it is to carve time out of a busy writer's life! ((hugs))
April 10, 2014 at 9:41 AM