The Art of Sinking Down

Have you ever wondered how cover artists (or interior artists) create those amazing images to go with the novels you read. One of the great things about novels from Seventh Star Press is they have real images crafted by real artists, both outside and in, and they fit the stories so perfectly. So, when I learned that Eric Garrison, author of one of my favorite horror novels Four 'Til Late, was touring the internet with book two of his Road Ghosts series, I jumped at the chance to learn more about the artwork for his book. I'm delighted to welcome Eric back to my blog today, and I hope you'll be as thrilled as I am with the images he shares, and his hints about the story Sinking Down. Over to you Eric, and thank you for visiting my blog.

The Art of Sinking Down

I've been asked to talk about the art of my latest novel, Sinking Down. First of all, I should tell you, I am no artist. Thing is, I have had to do my own drawings to convey visual ideas to my Seventh Star Press artist, Bonnie Wasson, so I did some whiteboard sketches of what I wanted, along with descriptive text. I thought my own drawings were too funny not to share with some friends, and out of that was born my Whiteboard Wednesday posts on my Facebook page (http://facebook.com/EricGarrisonAuthor).

So, let's see the difference between my comical scribblings and professional artist Bonnie Wasson's finished products. 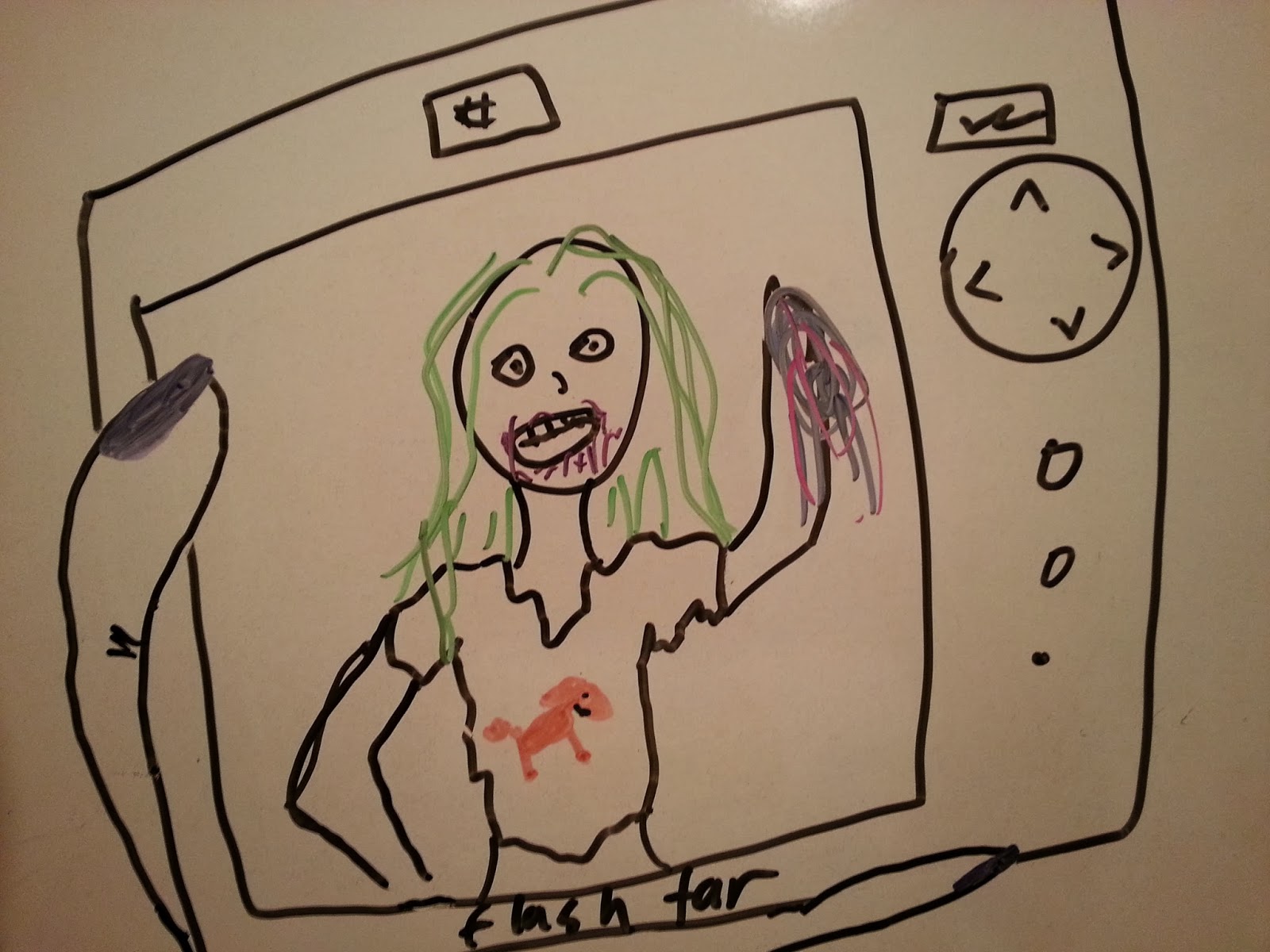 My intent with this first interior art piece was to show an image preview on a digital camera, the kind that's motion-activated, for hunting. My characters Brett and Liz had set one up to try to capture pictures of a reported chupacabra out in a state forest, along with some roadkill bait. What they caught instead was what seemed to be an undead, feral preteen girl, chowing down on the dead racoon. 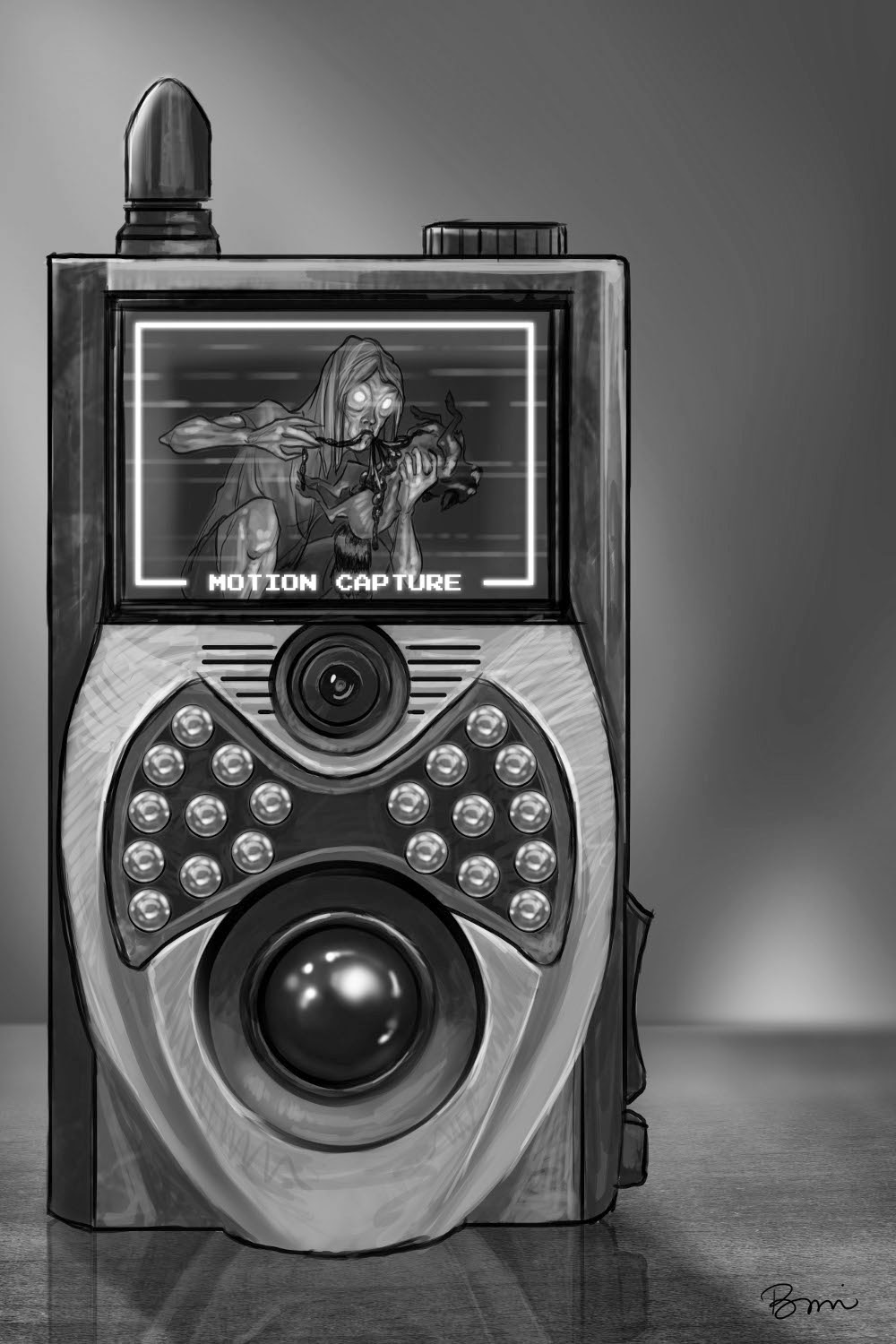 Here's where the Bonnie magic comes in. She shows intricate details on the camera, and gives us a creepy first look at the Little Ghoul who's central to the plot of Sinking Down. She's a monster, or so it seems, and this depiction of a grainy photo takes my silly sketch and makes it serious. 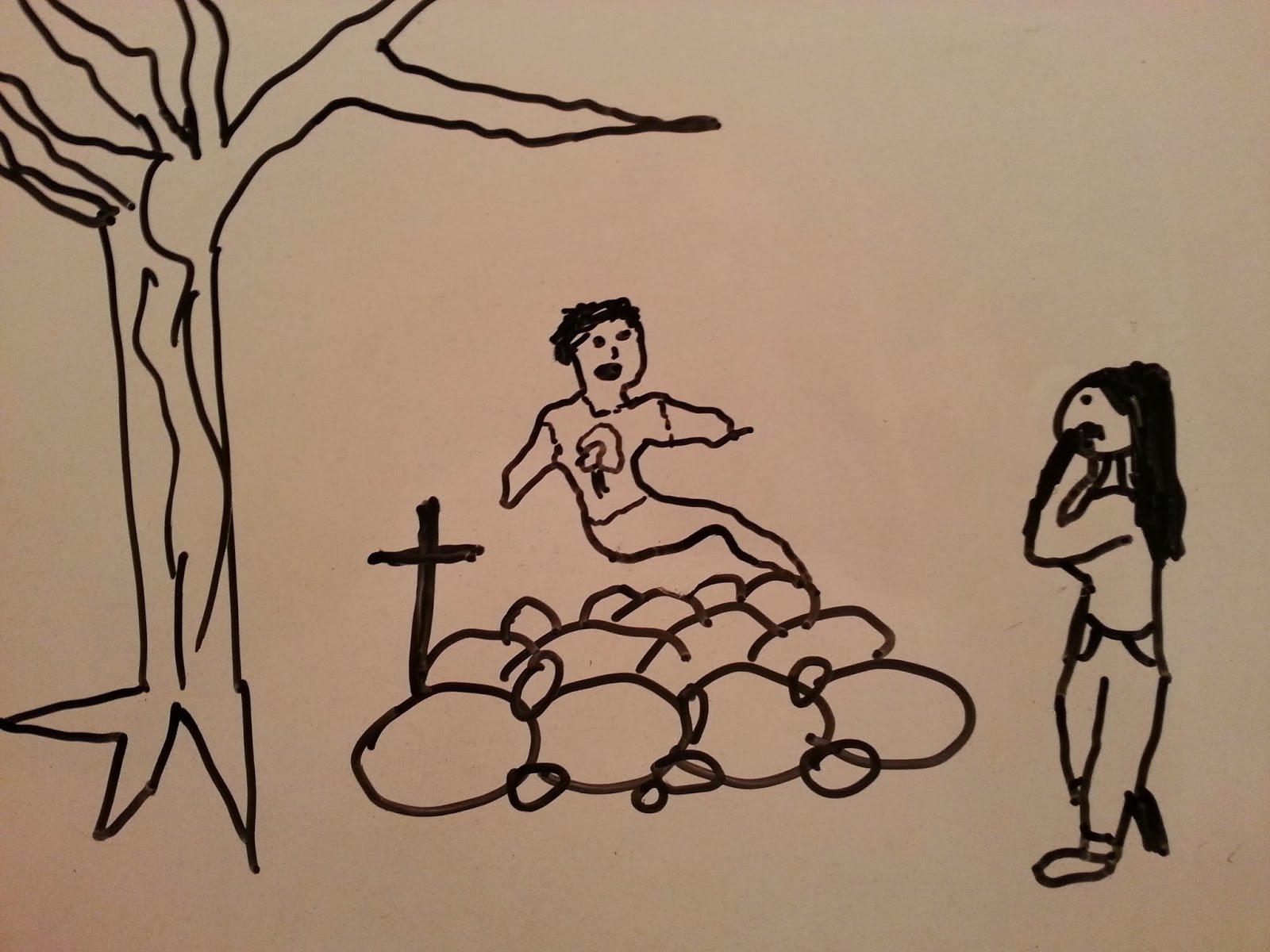 In this next interior art scene, one of my characters, Frannie, looks at a secret cairn discovered in the middle of a haunted forest out on the road. A ghost rises from the stones to give warning to Brett and the others. 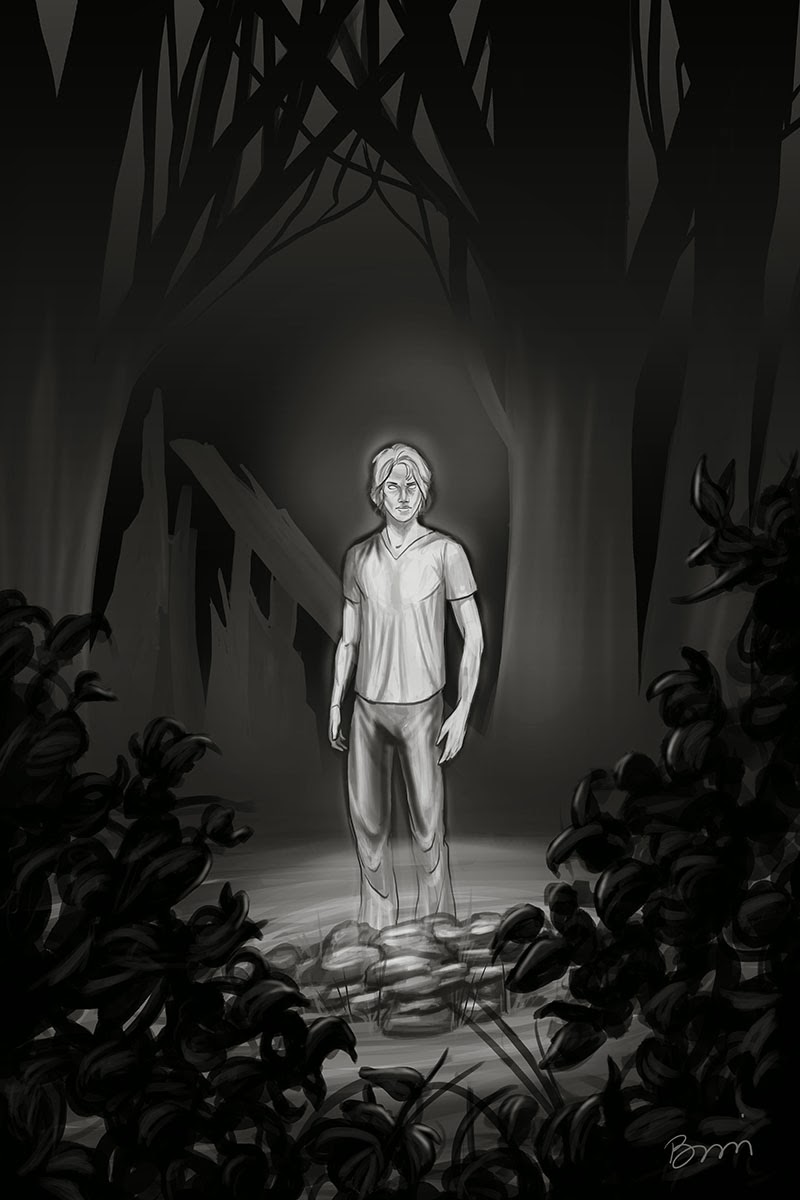 Bonnie took that Scooby-Doo-ish drawing of mine and gave it grim realism, though the subject is transparent at the bottom and more solid at the top to show he's a ghost. She decided that the ghost was the important part of the picture, and an onlooker only distracted from the focus of the scene, so Frannie does not appear. 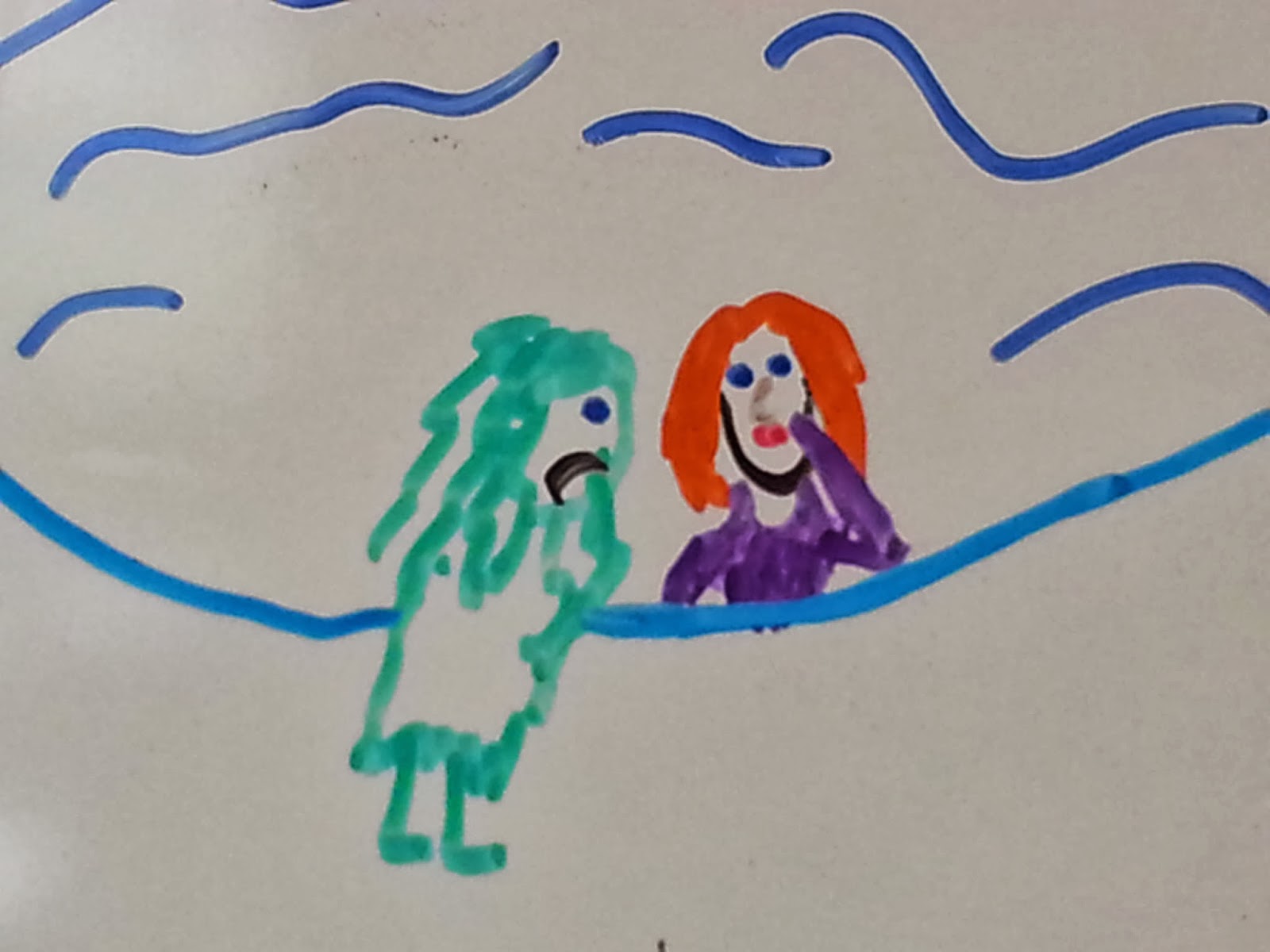 For the cover, I took an idea my brother had, rather than an actual scene from the book. Sometime before Brett and Liz discover her, the Little Ghoul peers at her reflection, which shows the human girl she used to be, in contrast to the monster she's become. 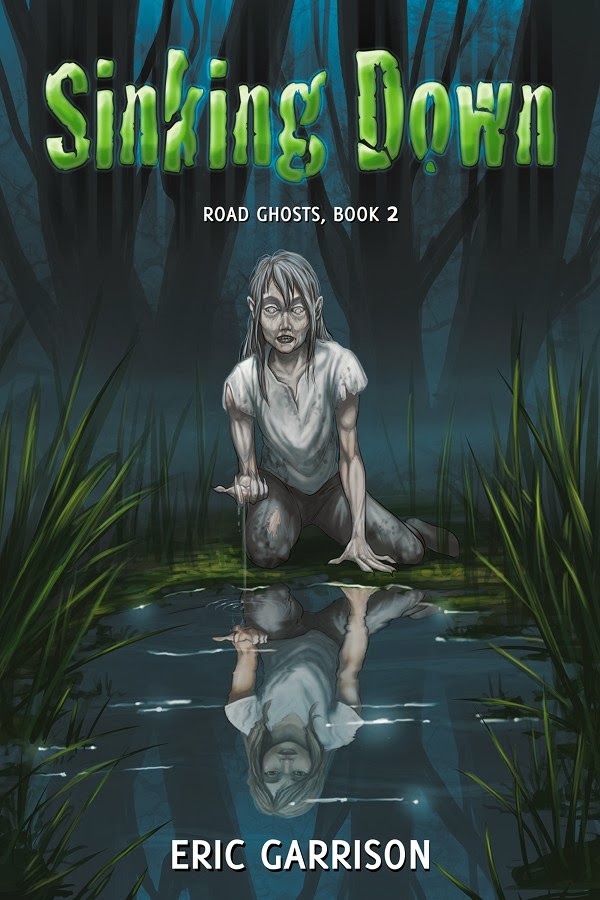 I couldn't have been more pleased with what Bonnie did with this cover. She took my crude sketch and conveyed the exact mood I wanted, with the feral creature staring at the reader, her reflection a sad, lost little girl. The details are amazing, and my heart goes out to my own character as I look at Bonnie's artwork. My hope is that these images make a potential reader want to know more about the characters and situations depicted.

So I may not be an artist, I do have fun with what little ability I have, and I'm very grateful to have a talented professional artist to turn my doodles into such amazing graphics.


That was fun! I love what Bonnie did with your pictures and your ideas, and it's really cool to see how they fit together. That cover is really haunting, and certainly makes this potential reader want to know more.

Like I said, Eight 'Til Late is one of my favorite horror novels, so I'm really looking forward to reading Sinking Down. And I really enjoyed looking for Whiteboard Wednesday on your Facebook page too - http://facebook.com/EricGarrisonAuthor is well worth a visit!

Thank you again for visiting my blog, and here's some information about the author and book and where to find it--you'll love it! Eric Garrison is active in the writing community in Indianapolis, Indiana. He lives in the Circle City with his wife, step-daughter and four cats. He also enjoys gaming and homebrewing beer.

Seventh Star Press published the first of his Road Ghosts trilogy, Four 'til Late, in July of 2013. Sinking Down was released in December of 2013, with the final title to appear in 2014.

Eric's novel, Reality Check, is a science fiction adventure released by Hydra Publications. This book reached #1 in Science Fiction on Amazon's Kindle store during a promotion in July 2013.

Paranormal investigators Brett and Liz find themselves back in over their heads when a forest hunt for a roadkill-eating creature offers up a little surprise. Back home with their ghoulish house guest, it becomes clear there’s more to this investigation than either of them thought. Worse than that, Brett's own fate is linked to the little ghoul's.

So it's back out on the road, with plenty of time for pit stops with a greedy ex, a convention of ghost hunters, partying with fake vampires, and even drinking and fighting alongside good ole Uncle Gonzo. But as the investigation goes deeper, and unseen connections come to light, Brett finds there’s much more at stake than getting through a rough patch with Liz.

A rescue mission. A race for a cure. New friends and old adversaries. Unbreakable bonds and supernatural danger. It’s going to be a wild ride. Can the friends save the nearly undead tween? Can she and Brett stop themselves from ...Sinking Down?

Sinking Down is the 2nd Book in the Road Ghosts Trilogy!

Malcolm R. Campbell said…
Fascinating post. There's so much clip art and cut-and-paste from stock photos and drawings these days, that it's nice to see instances when the art was specifically created for the book.

Sheila Deeth said…
So true, Malcolm. If every picture tells a story, it's nice to find new stories paired with new pictures once in a while.
March 3, 2014 at 10:20 AM

Anonymous said…
Malcolm, thanks for your comment. I agree! Seventh Star's attention to details like artwork was one of the prime reasons I wanted to work with them as a publisher.
March 3, 2014 at 10:45 AM