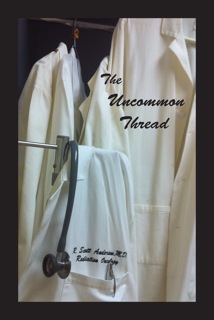 I read R. Scott Anderson's new book, The Uncommon Thread, recently and really loved it. You can find my review on gather here. And today I'm delighted to welcome the author to my blog.

"A compassionate Radiation Oncologist and dedicated father of seven, R. Scott Anderson, M.D. is also an unforgettable writer," says the blurb I've been reading. I believe it. "His columns have charmed readers for years in Mississippi, and he’s bringing some of those pieces out again, along with some new stories, in his collection of essays titled The Uncommon Thread (June 20, China Grove Press). He's also a former Navy diver who worked in operations in the Middle East, Central America, and in support of the Navy’s EOD community, SEALS, the US Army’s Green Berets, the Secret Service, and the New York Police Department at various times during his time in the service." He's also a really fun writer as you'll see below...


Hi everybody, my name’s Scott Anderson. I’m here to write a guest post and try to make you buy my new book.  Now I’ve been thinking about this for a while and I think I’ve come up with a plan that might work.  Just remember, you can trust me I’m a doctor.  So just relax, watch the little pendant I’m holding in my hand as it swings back and forth, back and forth. Just focus on the pendant, breath deeply, slowly, in and out.  You’re getting sleepy, sleeeeepppy, so sleepy you can’t keep your eyes open. You are not being hypnotized, but you are feeling an irresistible urge.  You must run to your computer and order my new book The Uncommon Thread, and all your life’s problems will be better…better…all better.
Ok seriously, I know you’re not hypnotized, I didn’t even film the pendant thing, but I do think my Labrador retriever got hypnotized, she’s laying there snoring like a pig.
My new book, The Uncommon Thread, is a collection of columns that I’ve written in the JOURNAL: of the Mississippi State Medial Association for the past five years, but it doesn’t really have much to do at all with medicine.  That’s what I supposed to be writing about when I started, but I kind of got bored with that, so I quit.  I started to write about the goofy stuff that happens to me on an everyday basis.  We, my wife and I is who I mean, ended up with seven kids to raise from various and sundry sources over the last couple of years.  My two from a prior marriage, I’ve had for a while, so they weren’t really a big surprise. We adopted a sweet little miracle baby because we weren’t having much luck getting babies of our own, and then her sister died of colon cancer and we ended up with her three boys as well.   Somewhere in all that my wife got pregnant after years of infertility treatment and we ended up getting five kids in eleven months.  You talk about adjustments in your lifestyle, whooo wheee.  So this little book is mostly about trying to get through life being a doctor, a husband, raising seven kids, and trying not to lose your mind in the process.
The book itself, started with me agreeing to be a temporary fill-in for the author of the column Una Voce, Dr. Dwalia South, for one column while she was busy being the association’s president, one column that’s all.
One column led to a second and then a third and no one else stepped up to take over, so I just kept writing.  The more I wrote the more things got out of control.  The columns veered from here to there.  They became their own little living things.  If I tried to re-write one it would morph on me, and turn into something else.  Being a creator that surrendered control was a very fun, place to be.  So, I just let them do whatever they wanted for almost a year and when that was over, I was done.  I wrote a farewell column, and went back to work on other projects.
But things didn’t work out the way I planned either.  Dr. South was diagnosed with cancer, and so, as she went through her surgery and the treatment that followed her surgery, and I careened along writing columns.  The stories continuing to find their own direction down a jagged and imprecise stream of conscious.
“What in the hell is this?”  My left-brain (and sometimes the editor) would demand.
“Don’t ask me to explain it,” my right-brain would beg, “just read it.  Then you’ll feel it.”
“But what are they supposed to feel?” My left-brain would counter.  “Readers want things to relate to one another.  They want to know what to expect.”
Everybody wants a common thread.
So to make the two sides of my brain knock it off and give me some peace and quiet inside my own head, I tried to come up with an explanation of what it was I wanted to do, and this is what I said:

“What is it about our lives that prepare us to be physicians?  Is can’t simply be our education, and it had to be there before medicine was our vocation? It happens all around us every day we practice, and I don’t think it will stop when we retire. We are what we are because of the millions of tiny incidents in our lives that build up like threads woven into a fabric.  That fabric of what we are is what allows us to function as the physicians we can become.  It is like taking thread to make a cloth, then taking that cloth and making a garment.
Medicine we think of as a white coat, but it just looks white because each thread, although it’s a different color, shines with promise and adds to the whole.
I want to show it all, the threads, the fabric, all of it.  Not just the coat.”

See, it isn’t the common thread that I ever wanted to show in the first place.  It’s the uncommon thread, the infinite number of uncommon threads that we weave together to become the people we are.

Try the book, you can get it at www.chinagrovepress.com or get an e-book from Amazon, if you can’t find it at home.  If your bookstore wants some, have them send us a note at chinagrovepress@gmail.com and we’ll be glad to send them some.

I really enjoyed reading this book!
Thank you Scott for visiting today. And for anyone wanting to find Scott elsewhere on the internet, here are a few links...