September 30, 2019
Today I'm delighted to spotlight the novel Mad Dog by Kelly Watt. It's just been republished and I really enjoyed reading it. 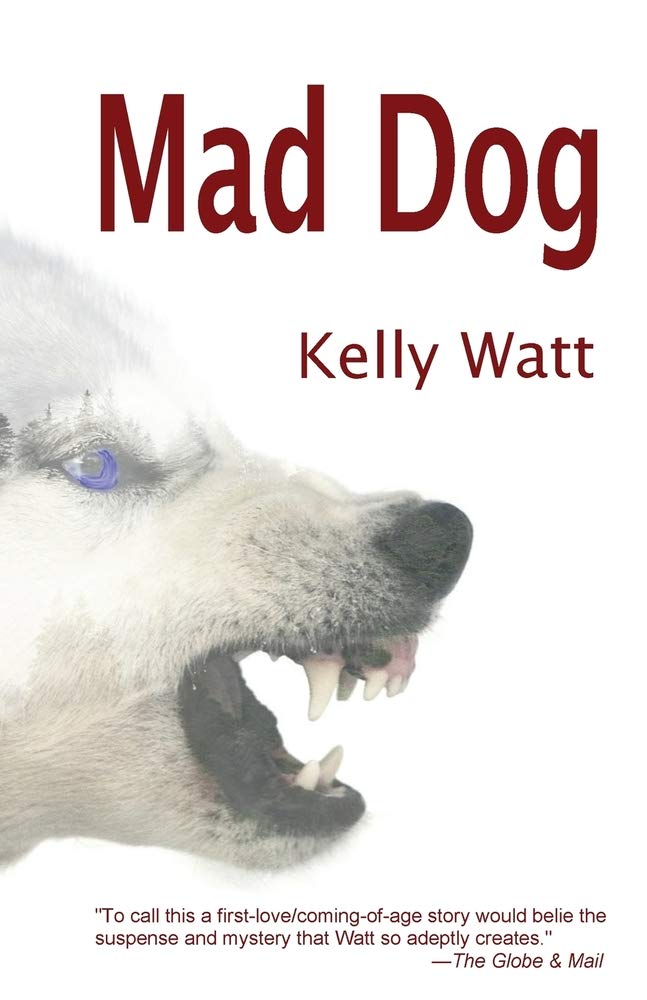 MY REVIEW:
Kelly Watt’s Mad Dog views the idyllic apple orchards of Ontario through the eyes of a lonely fourteen-year-old protagonist who veers between obedient and rebellious as the long hot summer draws on. Her mother disappeared long ago and Sheryl-Ann lives with her aunt, uncle and cousin on a family farm, surrounded by family and isolated from the world. They go to church together on Sundays. They're considered standoffish and odd, but they're part of the community. And in term time Sheryl goes to school and knows other girls seem different. But in summer…
This summer her larger-than-life uncle “adopts” a teen musician, a runaway dreaming of greatness. The story of Sheryl’s growing attachment to Peter plays over a background of music, blossom and bees. Everyone works together in the orchards. The dog barks. Everyone relaxes together in the evenings. And Sheryl dreams.
A haunting sense of wrongness lies behind the countryside peace of Kelly Watt’s novel. Readers are drawn in as surely as young Peter, happy to belong and delighting in the author’s evocative prose. But something else is going on, and no-one's talking about it. As summer falls to September, the reader hunts for clues.
The truth is unexpected in this tale, as is the dog of the title. Good and evil, myth and madness, horror and beauty combine. And the story is one that will stick in the reader’s mind. A girl who knows too much. A friend who knows too little. And a truth too little told…
Disclosure: I was given a copy of this novel and I freely offer my honest review. I love it (and I’m terrified by it!)


Here's the official...
ABOUT THE BOOK:
It's the summer of 1964 and the Supremes are the reigning queens of radio. Sheryl-Anne MacRae dreams of running away from her home on an apple orchard in southwestern Ontario to find her missing mother. But the teenager's plans are put on hold when her uncle and guardian, Fergus, the local pharmacist and an amateur photographer, brings home a handsome young hitchhiker.

When Sheryl-Anne meets the guitar-toting Peter Lucas Angelo, she falls in love. But life in Eden Valley is not as idyllic as it seems. As the summer progresses, Peter is pulled deeper into Fergus' dangerous underworld – a world of sex, drugs, pornography and apocalyptic visions.

Through the naïve eyes of the ethereal 14-year old Sheryl-Anne, Kelly Watt explores themes of child abuse and sexual deviance, and the secrets, dissociation and denial that allow it to flourish.

A gothic tale told in vivid, often hallucinogenic prose, Mad Dog was a 2001 Globe and Mail notable book and Watt's first novel. The book has been republished with a U.S. publisher (an updated edition).

Find it on Amazon at https://www.amazon.com/gp/product/B07XHLPL63/

Kelly Watt’s award-winning short stories have been anthologized, published internationally and longlisted for the prestigious CBC Radio’s Short Fiction Contest twice (2017/2015). She is the author of two books—the travel companion Camino Meditations (2014), and the gothic novel Mad Dog (2019). Watt lives in the Ontario countryside with her husband, a miniature schnauzer and three diligent chickens.

In case you'd like to "try before you buy" here's an excerpt from the novel.

Outside, the sky was purple and the Hay moon hugged the horizon in a yellow haze, the way it did sometimes in July. The escarpment was midnight blue, the orchard serene, the trees hissing gently in the wind.


The porch was brightly lit, the whole family had come over for Sunday dinner as usual and they always retired to the porch afterwards in the good weather for drinks and dessert. The conversation rose in small waves, the laughter echoing in the yard, ice cubes in cocktail glasses clinking.


Sheryl sat on the porch steps beside Earl’s skinny wife April, who smiled and asked, How you doing, kid?


Earl was in the midst of a story they all knew well, a piece of oat grass between his teeth, the end fluttering in the air.


Fergus was picking one day, Earl laughed, father had sent him up into the higher branches because he was light and nimble and did a good set--that’s the way you set up your ladder against the tree there, Pete. And there he was like a bird way the hell up in God’s country, it was the close of a day and there’s good old dad below, always the slave driver, hollerin' up at him: Hurry it up, hurry it up, I don’t have all day. Yellin' at Fergus when he rushed and dropped an apple or two. And Lordy, wouldn’t you know it, on the horizon a storm starts brewing. Before you can say Jim Dandy, a wind comes up, and the sky is going all black and snarly, but before there’s a drop of rain and young Fergus can get himself finished and back down that ladder, a stick of lightning comes out of nowhere, and in a blinding flash it whacks the tree. Pop’s yellin' to beat the band, callin' for help, and Momma comes runnin' down from the main house, the tree is on fire and the wind is howlin' and her hair’s all over hell’s half-acre and she’s bawlin' her eyes out, thinks she’s done lost her favourite son. And here’s Fergus cool as a cucumber coming down the ladder step by step and when he gets to the bottom he turns to Dad with his basket proudly and says: Didn’t lose a one.


Here we thought he’d been hit, but the lightning never touched him.


Fergus sat quietly invincible, blue eyes beaming, long legs crossed, the cigarette going back and forth to his mouth, while all eyes turned to him in admiration.


Rubber boots, he laughed. I took it as a sign, he added mysteriously. I saw this blinding light, and at first I thought I’d died and gone to my maker. My life changed after that day. I always felt I was spared for a reason.


Amen, Earl said and his wife April echoed him. It was a thing they had started doing lately, ever since Peter arrived, saying Amen and Hallelujah like Fergus was a preacher or something, and they were all in church, but a church with guitars and cocktails and hootenannies out on the porch. Sheryl couldn’t tell if they were joking or they were suddenly crazy for God but something was different. It had all started when they had come back to live on the farm, and while Fergus didn’t have a job he had read a whole bunch of books, underlining and scribbling things in the margins and wandering the house saying, It’s all making sense now, like he was in a trance or something. All of a sudden he started having a lot of ideas and talking about the coming of the new world and things began to happen just like he said they would. He had gotten a job at the pharmacy and bought the dwarf trees and organized Eammon and the orchard and even helped Earl buy the abattoir, and there was money now for things there never had been before when Fergus was in school and they all lived in a little flat in Toronto. It was hard now even to remember the dark and dingy days when they’d camped in windowless rental apartments, had macaroni and cheese for dinner every night and Sheryl’s uncle had lain on the chesterfield for hours not talking.


The men sat on the porch now and yakked about how these were the good times, and they treated Fergus with the kind of respect you treat a doctor or a policeman. Fergus had always been the smart one, but now he seemed extra-special. Every day he was a bundle of energy and enthusiasm, and Sheryl was proud because he was like a father to her, the closest thing to a father she’d ever known.


As I remember it, I still got a hiding for having taken so long, Fergus said.


You certainly had your share of beatings, Earl added, I don’t know why, but Lordy, papa sure had it in for you.


Peter looked over at Fergus wide-eyed, and Fergus smiled.


Josh said, Okay Pete, watch, I’m Sheryl when she sees a bee. He leapt off the stairs, his hands flapping up and down at his sides, squealing in a silly girlish falsetto, Get it away from me, get it away, running in loopy circles on the grass.


A hand-rolled cigarette appeared out of nowhere. Fergus passed the reefer to Peter who looked nervous, but Fergus calmed him, saying, Don’t worry we’re all family here. We share everything.


Peter took a drag of the cigarette and exhaled.


I had a dream not long ago that I lay in a circle, Fergus said, a white circle. I lay naked on an altar, stark naked with incense burning and candles, and there was a blinding light from above, and I saw a goat and a lamb. Suddenly I knew that the true law is man’s will, what is evil often does good, and what is good sometimes turns for evil. And knowing this my heart opened, embracing everything, and I felt freed from all my hangups.


Fergus closed his eyes, and the porch was silent, all eyes watching him. Change is going to rise up like a great white dove and sweep the world. We’re in the final process. In preparation we need to let go of the old game and embrace one another like one big family, kiddo, one big tribe. God is the Great Mathematician, he said; he seemed to be addressing everyone but his eyes were on Peter’s.


In Genesis, God creates fruit after the land and sea but before the sun, the moon or Adam and Eve. Go forth, be fruitful and multiply, he tells us. The apple, malus domestica was in the beginning, in the garden of Eden. Why? Because the apple is the fruit of the gods, the nectar of Apollo and Aphrodite, and look at us—surrounded by apples for miles!