What can waitressing teach a writer?

Today I'm delighted to welcome author Abby Bardi to my blog. She's touring the internet with her novel Double Take. But Abby wasn't always an author... Read on to find out more, and read to the end of the post to read an excerpt from her book. Over to you Abby, and thank you for visiting my blog!

In my latest novel Double Take, recent college graduate Rachel Cochrane is a waitress at a restaurant where she runs into an old friend who forces her to confront their shared mysterious past. You may be wondering, why would someone work as a waitress after earning a college degree? Two reasons: (1) Rachel has no common sense, and (2) Rachel is a lot like I was at her age, and that’s what I did.

It seems obvious that waiting tables is not the career goal for most college grads, even those in the liberal arts, but like Rachel, I loved being a waitress. I loved working in a clean (mostly), well-lighted place, serving food to interesting people I probably wouldn’t have met in another line of work. And when I look back on it, I can see that waitressing taught me a lot about writing.

Here are some things I learned:

1: Never cross a room without carrying something. A waitress has to make multiple trips between the tables and the kitchen, and you learn to always take something with you—menus, dirty dishes, clean napkins, whatever. This practice taught me the value of making every action count, not wasting time or energy, something that’s helpful to a writer: if you only have ten minutes to spare, do a little writing, even if it’s just a copy edit.

2: It’s important to multi-task. As a waitress, you have to know who ordered what, who needs more coffee, when people want the check. Similarly, writers often work on multiple projects at once, and it’s crucial to be able to keep track of all the threads.

3: Be aware of nonverbal cues. Being a waitress teaches you to read people. How do you know when they want their check? Their eyes follow you and they make twitching motions with their hands. Having an awareness of body language and facial expressions is helpful to a writer, and can also keep you from getting mugged on the subway (this happened to me once).

4. Respect the process. Food service, like writing, occurs in stages. It’s important to observe all the rituals: handing people menus, giving them some time to think, and returning at just the right moment to see what they want. You need to present their meal in a timely fashion, check on them, and clear their plates when they finish. You can’t rush this! Obviously, writing is like this, too.

6. Listen to people. In Double Take, Rachel’s restaurant experiences thrust her into a world very different from her sheltered college life. Some of the people she meets are doing cameos from my own waitress days: the guy with the mournful eyes who always ordered Jell-o; the fat man with his name on his pocket who spun a shiny quarter every day and said, “Double or nothing”; the waitress named Tee who had at least two other jobs; the waitress from Tunisia who spoke no English; the guy everyone loved who was beaten to death in a road-rage incident; the plumber whose son practiced telekinesis. More than anything else, waitressing teaches you that everyone is interesting and everyone has a story.

And that's a wise lesson to learn, for authors and for everyone else. I'm looking forward to reading your book sometime and learning more about Rachel.

Set in Chicago, 1975, Double Take is the story of artsy Rachel Cochrane, who returns from college with no job and confronts the recent death of Bando, one of her best friends. When she runs into Joey, a mutual friend, their conversations take them back into their shared past and to the revelation that Bando may have been murdered. To find out who murdered him, Rachel is forced to revisit her stormy 1960s adolescence, a journey that brings her into contact with her old friends, her old self, and danger.


WHERE TO FIND IT: 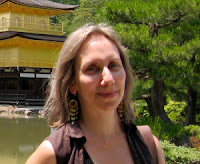 Abby Bardi is the author of the novels The Book of Fred, The Secret Letters, and Double Take. Her short fiction has appeared in Quarterly West, Rosebud, Monkeybicycle, and in the anthologies High Infidelity, Grace and Gravity, and Reader, I Murdered Him, and her short story “Abu the Water Carrier” was the winner of The Bellingham Review’s 2016 Tobias Wolff award for fiction. She has an MFA in Creative Writing and a Ph.D. in English from the University of Maryland and teaches writing and literature in the Washington, DC, area. She lives in Ellicott City, Maryland, the oldest railroad depot in America.

WHERE TO FIND HER:

1975
I recognized his voice from across the room. When I handed him a menu, he looked up absent-mindedly and went on talking to some guys, then did a double take.
“Cookie?” he said.
I tried on the name like an old article of clothing to see if it still fit. It felt like a suede fringed jacket. “Yep,” I said.
“Wow. You look so different.”
“I cut my hair.”
“Everyone did.”
“I’m older,” I said.
“Everyone’s older.”
“You look exactly the same,” I said. He was wearing a beat-up leather jacket over a green T-shirt, maybe the same jacket and T-shirt he had always worn. His thick black hair was shorter now and curly, skin still tan from summer, small mouth with perfect teeth. He still looked tough and handsome, but in a creepy way, like someone you couldn’t trust.
“Cookie, what the hell are you doing here?”
“I work here. I’d rather you didn’t call me that. My name is Rachel.”
“I thought your name was Cookie.”
“Nope. Do people still call you Rat?”
He laughed. “Nowadays I go by Joey.”
“Okay, Joey,” I said, since this was nowadays.
“Miss?” a voice called from a nearby table. The voice brought me back to where I was standing, in Diana’s Grotto, a Greek diner on 57th Street, with ten tables full of customers. For a moment, I had thought I was in Casa Sanchez.
It took me a while to make it back to Joey’s table. A divinity student had found a fly in his milkshake, and it wouldn’t have taken so long if I hadn’t made the mistake of saying, “So, how much can a fly drink?” Like most academics, this guy had no sense of humor and gave me a lecture on hygiene. It was amazing that knowing as much about hygiene as he seemed to, he would continue to eat at Diana’s Grotto. By the time I got back to Joey’s table, the men he had been sitting with were gone. Off-duty police, from the looks of them, I thought, or plain-clothes. We got a lot of cops in Diana’s; they slumped on stools at the counter with their guns hanging from their belts, sucking down free coffee. Back in the sixties, the sight of their blue leather jackets had always made me nervous, like I’d committed some crime I’d forgotten about.
“So why are you working here?” Joey asked. “I thought you were a college girl. A co-ed.” He flashed his white teeth. “I don’t mean to be nosy.”
“The problem with college is they make you leave when you finish.”
“And here I thought it was a permanent gig.”
“Nope.”
“But why aren’t you doing something a little more—”
“Collegiate? Don’t ask.” I slid into the booth next to him. From across the room, Nicky, the maître d’, shot me a poisonous glance. I ignored him. “I like it here.” I smiled a crazy little smile.
“Hey, different strokes.” His eyes swept the room, resting on a mural of a white windmill on an island in the Aegean. The windmill’s blades were crooked. I remembered this eye-sweep from Casa Sanchez, where he had always sat facing the door so he could constantly scan the whole restaurant. His eyes returned to me. “Didn’t I hear a rumor you were supposed to be getting married? Some guy in California?”
“Just a rumor. Glad to hear the grapevine still works.”
I felt someone hiss into my ear. Nicky had slunk up behind me. He looked like a garden gnome in a plaid jacket and baggy pants, reeking of aftershave that had tried and failed. “Rose!” he snapped. He never called anyone by their right name. “What’s in a name?” I always murmured.
“Be right with you.” I gave him what I hoped was a reassuring smile.
“This is a classy place,” Joey said as Nicky ambled away.
“He’s the owner’s brother-in-law.”
“Diana?”
“There is no Diana. She’s a mythological figure.”
“Like Hendrix?”
“Kind of.”
“Hey, you want to have a drink after work?”
“Actually, I don’t drink any more.”
“You want to come watch me drink? What time do you get off?”
“Nine thirty. You could come help me fill the ketchups.”
“What?”
“You know, take the empty Heinz bottles and pour cheap generic ketchup in them.”
“Sounds like fun, but why don’t you meet me at Bert’s? Back room?”
I thought for a moment. This did not seem like a good idea, but I didn’t care. “Okay, why not. So, can I get you anything?”
“Just coffee.”
“You want a side of taramasalata with it? It’s made from fish roe.”
“I’ll pass, thanks.”
When I brought him his coffee, he said, “You’re still a hell of a waitress, Cookie.”
“You’re still a hell of a waitress, Rachel.”
“Whatever.”
“Thanks,” I said.